Ninja stomps on all TV competition; finale scales to 3.37m 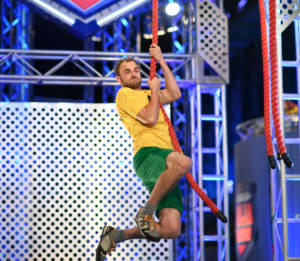 The shortest and most popular entertainment show of 2017 has come to a close, but not before scoring the highest ratings for a non-sport program for the year.

Last night's Ninja Warrior final on Nine was split into two episodes, the Grand Final and Final Stage, which aired back to back.

The Final Stage had a national average of three million and peaked at 3.32 million. It had an average metro audience of 2.1 million, and easily won all three demographics.

The Grand Final had an average metro audience of two million, however peaked marginally higher than the Final Stage, with 3.37 million nationally.

Is there a winner? #NinjaWarriorAu

Australian Anti-Climax Warrior is over... #NinjaWarriorAU

#NinjaWarriorAU congratulations on ruining such a good show with the time limit. 👎👎👎👎😡

However, host Rebecca Maddern had nothing but praise for the final.

It took 7 seasons in the US for a ninja warrior to be crowned. I thought the Aussies were exceptional! Bring on season 2 #NinjaWarriorAU

The final was criticised by some as the final scoreboard included recently deceased contestant Johann Ofner who died a month after filming his episode. He was shot dead in a 'bizarre incident' while filming a music video in Brisbane in January. The show did pay tribute to him.

Johann Ofner’s infectious energy and kindness made a great impact on all who worked and trained with him during his time on #NinjaWarriorAU. pic.twitter.com/lPwgAO5G4Z

All episodes of Ninja rated higher than every session of the Rio 2016 Olympic Games, with the show averaging at 2.454 million over the series.

Ninja has smashed ratings since its debut only three weeks ago, and all other shows have been left gasping for air.

It launched to a national audience of 2.3 million and has kept the momentum ever since.

The success of Ninja wasn't surprising for Nine, as the network predicted it would strike a chord with audiences before its launch.

Ninja was one of the most expensive per-hour productions on Nine's slate this year.

“Before you mount a show like Ninja that requires you to bring out 60 tonnes of metal from Texas, you've got to be pretty confident that it's going to do okay,” Nine's head of content, production and development Adrian Swift told AdNews before its launch.

According to Nine, the show's popularity could be pinned down to its cross-generational appeal, as well as the non-stop abs.

“What it shows is that if you have big programs, families can watch together,” said Swift.

“Indeed families will come together in droves and watch them together. It really shows the power of free-to-air television around an idea that people love.”

Seven's Yummy Mummies show again failed to crack the top 20 in its recently moved 9.30pm spot. Ten's Family Feud came 20th in the ratings, with an average metro audience of 355,000.