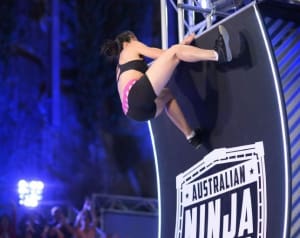 Nine's Australian Ninja Warrior continues to leave all other shows in its wake, with last night's semi-final episode pulling in 1.74 million average metro viewers, slightly down from last Sunday but still well ahead of competition. It had a national audience of 2.46 million and peaked at 3.07 million.

Three of the four made it through to Tuesday's grand final but Hah, who was unlucky to miss out, stole the show by becoming the first Australian woman to conquer the warped wall (In the US it took six seasons and no woman in the UK has defeated it).

The fastest time of the evening was notched up by the Turbo Tradie Ashlin Herbert, who blitzed the semi-final course and looms as a major threat to the rock climbers dominance of the competition.

What makes Ninja's performance remarkable is that it was up against Ten's MasterChef Grand Finale part one, which drew in an average metro audience of 953,000 viewers, with a national audience of 1.29 million and a peak audience of 1.75 million. The show's final episode for the season will air tonight.

Seven, which has so far avoided taking on Ninja Warrior with its own tent pole shows, aired Border Security at 8pm, which had an average metro audience of 527,000.

Nine News was the second most watched show for Sunday, with an average metro audience of 1.22 million.

Nine's Sunday broadcast of Ninja Warrior was the most watched prime time show of the ratings week, with a city metro audience of 1.75 million.

Ten's MasterChef continued solid ratings of key advertising 25 to 54s demo, with four of the top 10 while Ten's Have you been paying attention also made the top 10 programs list - dominated by Nine and Ten.

In prime time, Nine attracted the highest audience for the week in terms of channel share, with 40.5% of the share, followed by Seven with a 35.2% and Ten with 24.3% of audience. It also won the week across all demos. Check out the full weekly ratings wrap here: