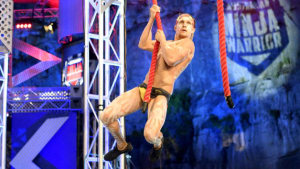 Nine's premier of Australian Ninja Warrior has lived up to its billing by attracting a national audience of 2.33 million viewers.

It's also the highest launch of a new TV entertainment show (excluding mini-series) since The Voice debuted in 2012.

Achieving ratings of 2.3 million in a market the size of Australia puts Australian Ninja Warrior ahead of sister franchise ratings in the US (6.28 million) and the UK (3.7 million) when population sizes are factored.

“We have said that 2017 was going to be a year of taking risks,” Nine's chief sales officer Michael Stephenson said. “With Australian Ninja Warrior we introduced a brand new show to Australian audiences and they clearly loved it.

“Sunday night’s audience numbers surpassed all expectations and Ninja Warrior demonstrates the tremendous power of free-to-air television to bring millions of Australians together in a shared experience.”

Last night's show saw the Awesome Pawson twins smash the six-obstacle courses to post the two fastest times, a shave above a minute. Their parkour skills and agility simply blew away a field of super fit Aussies from all walks of life, including national athletes, gymnasts, social media personalties and Australia's first Bachelor. Check out Dylan Pawson's effort below.

The night also featured an outstanding effort from Jack Wilson. The indigenous star was the first to complete the course and sported budgie smugglers to "get out of my comfort zone".

Nine's head of content, production and development Adrian Swift describes it as "a big, competitive version of crossfit" that features "some of the best abs in the country".

The social media response to Ninja was largely positive.

Australia Ninja warrior just makes you feel unfit and a lazy piece of shit. But so good to watch

Nine had big expectations for Australian Ninja Warrior, first spruiking it as one to watch at its upfronts last year. Three sponsors, KFC, painkiller Advil and Berocca, have backed the series, which runs for three nights per week over the next three weeks.

The show provided a lift to the 60 Minutes news show, which posted a metro audience of 1.64 million and a national audience of 2.3 million. Nine won the night with a share of 28.7% of audience, Seven came second with 21.9% and Ten came third with 9.9% of audience.

Seven's House Rules finale, which had an average metro audience of 1.14 million, saw Aaron and Danielle Winter take home the top gong of the show; winning $200,000.

The program was split into two shows, 'Winner Announced' and 'Grand Final'. The reno show has been leading the prime time slot however was knocked off by the Nine's Ninja Warrior.

Seven's debut of Yummy Mummies, a reality show chronicling the life of four wealthy mums-to-be, pulled in an average metro audience of 755,000.

Seven aired both the first and second episode of Yummy Mummies on the night, however viewers appear to have lost interest by the second episode, which had an average metro audience of 428,000.

Ten's MasterChef pulled in an average metro audience of 625,000, well down on previous Sunday nights for the cooking show.

Nine's The Voice finale show was the most watched prime time show of the ratings week, beating Seven and Nine's news bulletins.

Seven pulled in the highest audience for the week in terms of channel share, with 38.4% audience, followed by Nine with a 36.8% and Ten with 24.9% of audience.

All three channels pulled in relatively similar audiences from Monday through to Thursday, however Seven's popularity spiked on Friday and continued over the weekend, holding roughly 23.9% of audiences on Thursday to 30.6% on Saturday.

Meanwhile Ten's share dropped from Thursday to Saturday night, falling from roughly 19.9% on Thursday to 14.1 % on Saturday. Nine's share remained steady throughout the week.