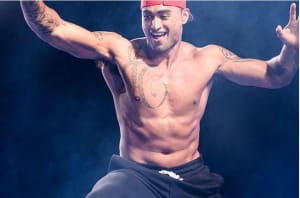 Are abs one of the major draws of Australian Ninja Warrior?

In its first week, Nine's Australian Ninja Warrior has smashed all expectations with three nights in a row north of two million viewers.

Last night, the show gained an even larger audience with 1.76 million metro viewers and 2.5 million nationally. To put that into context, it beat Ten's Masterchef, which is approaching finals week, by 1.45 million viewers nationally.

The success of Ninja Warrior has exceeded all expectations from Nine's top brass, with the notable exception of sales boss Michael Stephenson, who bullishly told AdNews beforehand the show would break through two million.

But why has it been so successful? It's not like Australians haven't had shows that are somewhat similar over the years – Gladiator, Wipeout and who can forget the magnificent It's A Knockout from the 80s, to name but a few.

“It's done what we dreamed of,” Swift began. “In a world of cooking, renovating, singing and generally bitching between participants, to have a show that's about conquering something that's generally impossible to conquer is really exciting.”

The Australian version of Ninja Warrior has a slightly different feel to it than other territories, particularly compared to the US, where the show is more “blokey and commando”.

Swift says Nine has spent more time developing the back stories of contestants to add a more human look and feel.

There's also another draw that should not be overlooked.

“The executive producer is a brilliant woman called Julie Ward and she came to me one day and said, 'I can't tell you how every woman in the office is fascinated by these men and their amazing abs'," Swift recalls.

“She said, 'you just don't see it in this quality and number'. So we said, 'get them to take their shirts off more, can we have more abs?'.

Is the season too short?

AdNews asked Swift if Nine was starting to have any regrets it didn't expand the format beyond nine shows for its launch season.

“No, absolutely not,” he swiftly responds. “In no other territory is it three nights a week or as compressed as this. We wanted this to be a big middle of winter TV event and so far it's paid off.”

Swift says it's too early to speculate on whether the format will be expanded next year, although last night's ratings growth is certainly pushing the case. There are other elements that may also be thrown into the mix.

For example, a wildcard episode could be introduced where contestants who just missed out or made a big splash get another stab at progressing.

And, excitingly, there is a chance we could see Aussie Ninja Warriors pitted against the rest of the world. Swift told AdNews producers of the American franchise had already approached Nine to discuss an international battle.

“We could also do an Ashes episode,” Swift adds. “There is so many places we can go with this show.”

Just which side Australian Ninja Warrior host Freddie Flintoff would take in such a scenario remains unclear.