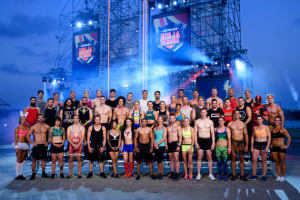 Australian Ninja Warrior has recorded the highest rating launch episode for a new TV franchise in five years, but the power of the program is in its demographics and appeal to families.

“What it shows is that if you have big programs, families can watch together,” said Swift. “Indeed families will come together in droves and watch them together. It really shows the power of free-to-air television around an idea that people love.”

Swift cites the demographic data from Sunday which showed a clear 50:50 audience split among men and women and also a cross-generational appeal including among those under 18. 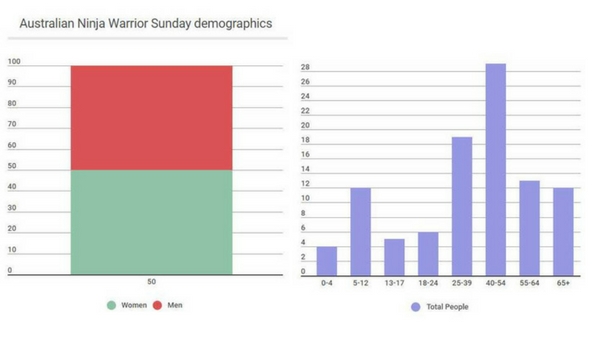 “The most interesting demographic was the percentage of kids watching the show – almost 20%,” he said.

“By any metric this is the demographic supposedly sitting in their bedrooms not watching television, but on Sunday night they absolutely watched television – in huge numbers.”

Nine’s chief sales officer, Michael Stephenson, said Australian Ninja Warrior was another big gamble by the media company, but just like Married at First Sight in February, it is one that has paid off in spades.

“We have said that 2017 was going to be a year of taking risks,” said Stephenson. “With Australian Ninja Warrior we introduced a brand new show to Australian audiences and they clearly loved it.

“Sunday night’s audience numbers surpassed all expectations and Ninja Warrior demonstrates the tremendous power of free-to-air television to bring millions of Australians together in a shared experience.”

For Swift, part of the appeal of Ninja Warrior is that it is very different to anything else on Australian television.
“What it really shows is that in a world of stripped reality television, something that is fresh and different can be really appealing,” he said. “Ninja is not cooking, it’s not renovating, and it’s not singing – it is true human achievement in its purest form.”

Swift said he was confident that Australian Ninja Warrior would continue to pull strong audiences, especially due to the powerful storytelling and big personalities on the program.

“Ninja is about real people’s stories and their desire to conquer this course,” he said. “Its power is in the fact that it is everyday Australians taking on something quite extraordinary.

“We have some very well-known people taking part in Australian Ninja Warrior, like Adam Cooney, Tim Robards from The Bachelor and Beau Ryan. What is fascinating about the course is that it’s not the people who you think logically who would get through to the end, it’s a whole range of Australians.

“We felt the audience wanted something different, something that looked different and felt different, and Australian Ninja Warrior is exactly that.”