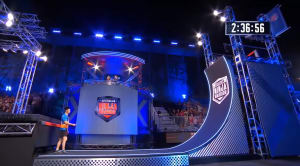 Nine's Australian Ninja Warrior has smashed two million viewers for a third night runninng, enhancing its reputation as the biggest TV launch of the past five years.

The success of the show is so strong that rival Seven has decided to reschedule the launch of new show Little Big Shots, which was due to debut on Sunday. A new launch date has not been set.

"We want to screen Little Big Shots to the biggest audience possible and attempting to split the family audience with Ninja does not feel like a smart play," Seven director of programming Angus Ross told AdNews.

The show is only 200,000 people down from its Sunday launch, which pulled in 2.33 million viewers, while 2.27 million tuned into the second episode on Monday.

In the past two years, no entertainment shows have pulled in three consecutive +2 million viewer audiences, let alone a completely new concept.

The next best program last night, Nine News, had an average metro audience of 1.08 million. Against Ninja, Ten's cooking format MasterChef attracted 779,000 viewers while a special on Princess Diana dropped to 599,000 viewers on Seven.

Seven's Yummy Mummies failed to crack the top 20 programs for its third episode. While the audience numbers are not available, Nine's broadcast of Casino Royale came in 20th place and had an average metro audience of 380,000.

Last night's episode of Ninja featured three new obstacles in the course and 50 new competitors, including two members of Australian music group Justice Crew, who both had a rapid Rise and Fall before troubling the scoreboard.

The first Ninja to complete the course of the night was stuntman Luke Ha, who clocked a time of three minutes and 12 seconds, check out his full run here: