Scam work at Cannes - “a madness of our own creation” 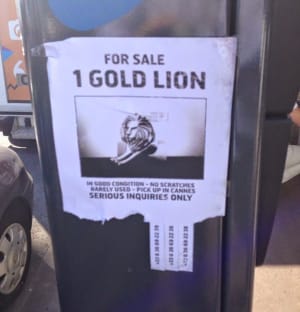 In a few days 15,000 creatives, marketers, media execs, tech vendors and all manner of marketing and advertising types from 100 countries will descend upon Cannes, France, for the annual Lions Festival of Creativity. There are 40,000 entries submitted across 23 categories and the best creative work in the world will be celebrated.

But, almost as soon as the first metal is awarded, conspiracy theories around who is voting for who, and whether work is deserving, or ‘scam’ created purely to win awards, will emerge.

The premise behind Cannes Lions is that creativity can be a driving force for business, for change and for good. It celebrates pinnacle work that is pushing the boundaries of creativity and delivering returns for clients.

The argument about scam work is that it isn’t real, and doesn’t drive business - because there is no business imperative behind it. It runs once, and wins the agency kudos and awards, but doesn’t turn the dial for the alleged client. Without a commercial or behavioural outcome, the work is just art.

The case for scam

Most are in agreement that scam work is the scourge of the creative industry, with Clemenger Melbourne ECD Ant Keogh telling AdNews that advertising award shows are already seen as indulgent, and if scam isn’t reduced or eradicated they’re “in danger of making the industry seem pathetic and irrelevant”.

Last year, Copyranter blog wrote a scathing piece that called for Cannes Lions awards to be killed off because “The festival has become a complete charade, full of scam ad entries.”

In 2014, Australian entries for McDonald’s (DDB Sydney) and Panasonic (Saatchi & Saatchi) were at the centre of a row over whether the work they entered was a scam or not. It left a bad taste but McDonald’s then CMO Mark Lollback (now CEO of GroupM) who defended the work in question calling it a “test” for the brand and bemoaning the Australian industry’s habit of knocking down success and notes it was a case of “tall poppy syndrome”.

Cannes judges in 2015 also shrugged off scam, and many told AdNews that scam is getting rarer, and judges are equipped to spot it.

In the wake of Cannes last year AdNews ran an online poll asking ‘Is scam still an issue in awards shows - Cannes and beyond?' The overwhelming majority (62%) answered 'Yes, it should be stamped out'.

Two in 10 (19%) said ‘it's a problem, but is just a part of advertising’, suggesting the industry should just accept it and 10% said it was improving. But not one person taking the poll chose the answer that it wasn’t a problem.

There has been an argument that often so-called ‘scam’ work is actually “proactive work” and is a good way for creatives to flex their creative juices. Proactive work can be a “great motivational tool” internally and a demonstration to clients of the business at its best, according to Brendon Guthrie, former Ogilvy Melbourne ECD and now creative partner at Mr Smith.

Scam work is different, however, and has the opposite effect, he adds.

“Like an Olympic silver medallist smiling through gritted teeth as she stands one step below a gold winner juiced to the eyeballs on veterinary-grade pharmaceuticals, agencies entering legitimate work that’s survived as a beautiful piece of craft have every right to be pissed off when they see work awarded that’s never been anywhere near a client presentation, let alone a legitimate media schedule,” he says.

“It gives those who believe the stereotype of us [the advertising industry] as self-absorbed, self-interested and amoral plenty of ammunition.”

He reckons that the prevalence of scam work in recent years was “a madness of our own creation” and part of the reason it was so rife was networks adding awards as performance KPIs for remuneration – something he believes “planted the seed of corruption”.

Keogh feels that seasoned judges are “fed up” with scam work but admits that when judges are sitting through hundreds, even thousands, of ads back to back, when something great stands out, sometimes scam can rise to the top. The scale of Cannes means that judges don’t have time to dig into the facts presented in the case study of every campaign, although if something seems amiss, they do.

But there is some consensus among the creatives AdNews spoke to this year, that the industry has passed “peak scam”, as Guthrie calls it.

MullenLowe ECD Richard Morgan believes that scam “in its traditional sense is somewhat of a bygone era”. By ‘traditional sense’, he means the print ads that run just once in an obscure local title, or spots that run on late night TV, never designed to be a genuine element of client activity.

“Someone, somewhere will always try to have a go and run the gauntlet, but the regulations are too tight and the penalties too severe for most sane people and agencies to risk being caught out,” he says.

But while it seems that perhaps the worst days are over, there are other dimensions of ‘scam’ emerging that create new “grey areas” as Keogh puts it.

Keogh believes that as the remit of agencies moves beyond creating ads, an exception around work that may seem to be scam but in fact isn’t is emerging. Enter ‘The Prototype’. Is it a genuine innovation, or a large scale stunt to generate award interest?

There are a raft of product innovations, experiential stunts and products that walk a thin line between being genuine campaign ideas designed to move the dial for clients and things built to create headlines and win awards.

M&C Saatchi’s Clever Buoy in partnership with Optus won a spate of awards at Cannes and around the world, but many were critical that it wasn’t a genuine product. Grey London won big last year for its Volvo Life Paint, but it did attract criticism that it isn’t a genuine product. JWT Sydney’s smart-peg ‘Peggy’ for Omo this year has faced similar accusations in Australian media, ditto Clemenger’s Pepper Hacker for Dolmio, and Durex’ Fundawear activity from 2013.

Keogh says Fundawear is a good example of a legitimate award-winning work even though it wasn’t a consumer product.

“It was a one-off, each pair of undies cost hundreds of dollars to make and were completely impractical to manufacture at scale, but the idea was outrageous and consequently went bananas in the media … These ideas can be legitimate, not as a product but as PR and they should be judged as such. If they didn’t get eyeballs then they are scam,” he says.

It comes down to the intent behind the work, another former Cannes judge, told AdNews.

When doing good is bad

‘Do-gooding’ may be another evolution of scam that is becoming rampant. Another senior creative that has judged Cannes in previous years, didn’t want to be named, but said there appears to be a “moral pandemic” spreading throughout global award shows, where agencies and brands are creating work that aims to fix the world’s ills to be in with a great chance of winning awards.

“Cannes has almost become a ‘festival for good’,” she said. “It’s getting borderline ridiculous.”

The trend can be seen in recent years where the objective behind an increasing proportion of winning work is to ‘do goo’ or demonstrate purpose – rather than a commercial objective.

It’s not that the industry shouldn’t be trying to be a force for good, but the intention behind some campaigns and examples of work leans towards “award-seeking” not a genuine agenda.

“A few short years ago Cannes reels were full of great humour that sold stuff. Now you’d imagine that telcos’ and FMCG brands’ only role is to stamp out slavery or champion human rights … I’d like to see the balance restored to bring ‘selling stuff’ back into the equation. That way when a brand does do something that is truly good it stands out and isn’t just par for the course.”

Back scratching and block voting

Anecdotally, tales of block voting, or strategic alliances between judges from certain regions are common, but there’s a perception that everyone is at it. It’s rare that there would be enough Australian or New Zealand judges to make it something that skews results for Aussie work but Latin American countries are often called out as the worst culprits and it can be seen to influence outcomes in the judging room.

Clemenger’s Keogh, tells a story about judging one year of Cannes and after the voting was over, asking a fellow judge from a country that he won’t name, why they vote together. “He just said ‘All you guys were doing it too’ meaning the Anglo Saxons, but I know that wasn’t happening … In my experience a judge from the UK or US is just as likely to vote against an Aussie than with one – it’s just judging.”

Morgan also believes “the era of [block voting] has effectively passed” and didn’t see any evidence of it when judging in recent years.

The festival has put in digital processes that monitor voting and pick up any irregularities, and judges are all warned that the “algorithms” are closely monitored.

“The knowledge that someone is watching CIA style is enough to make anyone paranoid … someone will always have a go, but the regulations are too tight and the penalties too severe for most sane people and agencies to risk being caught out,” Morgan says.

So as the metal gets handed out next week in Cannes – AdNews wants to know if you think any undeserving campaigns have slipped through the net. You can let us know in comments or email editor Rosie Baker at rosiebaker@yaffa.com.au