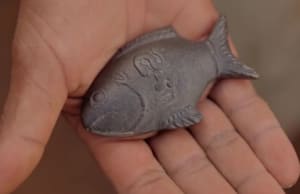 A controversy flared up yesterday around exactly who should be credited as the winner of the Product Design Lion – the Lucky Iron Fish. The entrant agency was Dubai-based agency Geometry Global which scored Cannes points for winning the award.

However, after the winner was announced, there was some controversy as it was debated whether the agencies could win the award because they didn’t create the product themselves. An Australian pair from Singapore-based PR agency Arcade, which is also listed on the credits, claimed via a statement on Campaign Brief Asia that the design work was not the work of Geometry and calling the entry “bullshit”.

Geometry Global and Memac Ogilvy, the Dubai-based agency group that entered the work has since claimed that it was not aware it could be entered by multiple agencies/companies across different categories, and that it was never trying to claim that it developed the product but was just involved “to introduce the product to a wider audience”.

It has agreed with the Festival that the grand Prix will be awarded to The Lucky Iron Fish Company, instead of the agency. The product has been the talk of Cannes however. The product is essentially a block of wrought iron, developed to help families in developing regions in Cambodia to improve the nutrition and iron levels in their diet to tackle high levels of anaemia and iron deficiency. It is shaped like a Lucky Fish to reflect an iconic part of Cambodian culture. Cooking with the iron fish in the food pot increases the level of iron and has already managed to reduce iron deficiency in the community by 50%.

Cannes Lions has since offered a statement quoting the Festival, The CEO of Lucki Iron Fish and geometry.
Following reports concerning the validity of this year's Product Design Grand Prix Winner, "Lucky Iron Fish" from Geometry Global Dubai and Memac Ogilvy MENA, the organisers of Cannes Lions have undertaken further investigation. We have received prompt written confirmation from Gavin Armstrong, President and CEO of the Lucky Iron Fish Company and Dr Christopher Charles, who developed the original prototype, that they worked in close partnership with the agencies concerned. This follows below.

Gavin Armstrong, CEO of the Lucky Iron Fish Company, stated: “Based on my understanding of the entry mechanism at the Cannes Lions festival, we gave Geometry Global approval to be the entrant for all Lucky Iron Fish entries, with full credit to Lucky Iron Fish and other participating entities. There has been no intention to misrepresent the role of Geometry Global or the campaign in the entry or any communications. I was present during the event and received each of the Lions award on stage. I also presented to the Judges for the Innovation award."

It seems like it was all a big misunderstanding this time around but the issue of which agencies can claim metal for their part in a campaign or project has been contentious before. The issue around what role entering agencies play in the winning entry/campaign work also came up in the PR Lions, when a question was asked of the judges what role the winning PR agency played in the #Likeagirl campaign for Always, an idea developed and executed by Leo Burnett Chicago.