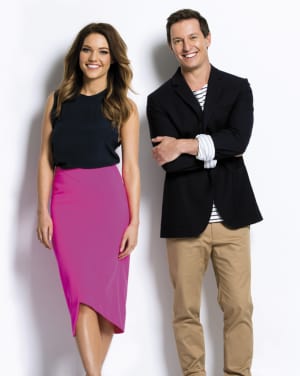 Southern Cross Austereo (SCA) has admitted defeat amidst the frosty radio ratings at Sydney’s 2dayFM and has removed Rove & Sam from the breakfast menu, instead bumping the duo to a 7-8pm slot only.

Rather than starting 2016 fresh, the twosome started their new roles on 9 November 2015 and their first radio ratings, which was the last of 2015 in December, saw them scoop a 3.0% audience. Their share remained the same in the first and second radio ratings of 2016.

Despite saying it would remain faithful to the pair, SCA was out of roses and has now decided to back comedian duo, Em Rusciano and Harley Breen for the prime time breakfast slot starting at 6am from 23 January. The show is aptly titled The Em Rusciano Radio Show with Harley Breen.

Rove & Sam now move into a nightly national show that airs Monday to Friday from 7pm to 8pm across The Hit Network’s 43 metro and regional radio stations, commencing nationwide on Monday 30 January.

“The decision came after Rove & Sam, along with SCA executives, took some time off over the summer and after review, decided that the best route forward for all was to move their show into another time slot,” an SCA statement said.

McManus added he was looking forward to continuing working with Frost in 2017 at a more “civilized time of day” and Frost says she’ll be cracking on with “other commitments outside of radio”.

Head of content at Hit Network, Gemma Fordham, says the feedback SCA has received around the new hosts “has been incredible”.

The herpes of radio

“Nothing is off limits and Em connects with her audience brilliantly, her humor and honesty is obviously what’s driven her to have a combined social media following of over 350k and we look forward to Em and Harley waking up Sydney each day,” Fordham says. (AdNews spies that Sam Frost has 445k Instagram followers alone).

Having just stepped off the summer breakfast show and after hosting a Sunday night show for The Hit Network, Rusciano says she is “excitified” at the thought of hosting breakfast radio in Sydney, which is a combination of her being excited and terrified.

“I love radio, I’ve been in and out and in and out again for 12 years. I'm like the herpes of radio… wait, I probably don’t want those words near my name for all of time do I? This job is the holy grail, the philosopher’s stone- the one ring of Mordor! I'm bringing along one of my favourite comics and humans: Harley Breen and together we hope to excitify Sydney.”

The first radio ratings of 2017 will be out in March. Keep an eye on AdNews for the results.

What do you make of the new breakfast show news?

Check out our coverage of all surveys below:

See here for Another 'stellar year ahead?' Radio predictions for 2017