Kiis hosts Kyle and Jackie O have come out swinging, taking the top Sydney FM breakfast spot in the first radio survey of the year.

The duo continued their momentum from 2015, performing well ahead of the pack on 12.5% audience share after gaining 2.4 points from last survey.

In its second survey period since launch, SCA's 2DayFM breakfast team of Rove McManus and Sam Frost stayed flat over the period, on 3.0% audience share.

Overall, 2GB continued its unstoppable run in breakfast after gaining another 0.8 percentage points to hit 16.0% audience share, followed by ABC702 on 10.5% after a slight dip. 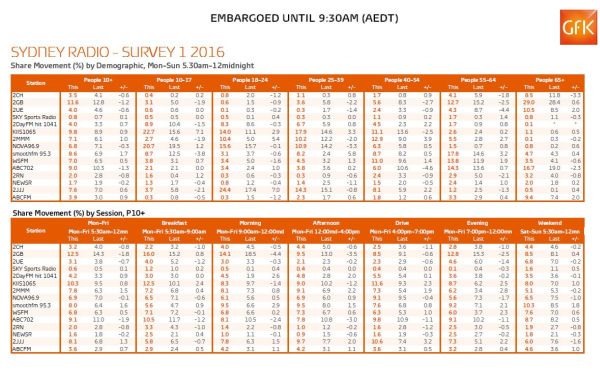 Gold104.3 and ABC774 have made solid gains as listeners tune off from FoxFM during the important breakfast and drive slots.

During drive, Gold gained 2.3 percentage points to 9.4% of the audience share, which lifts the station to third spot. Gold's drive is split between Gavin Miller and an hour of Jonesy and Amanda.

During breakfast, ABC's Jon Faine was the big winner gaining 2.6 percentage points to 16.5% of audience share.

3AW's Ross and John 2 percentage points, but still hold onto top spot with 17.8 percentages points, while Triple M is the best performing FM station with 8.5 percent of audience. 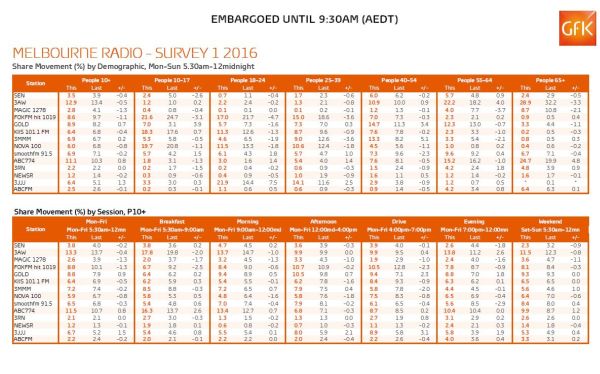 While Brisbane's 97.3FM continues to lead the field with the largest listenership (12.1 percentage points), Triple M is holding fourth place but has made bigger gains than any of the other stations in the pack. Reaping an overall 10.1 percentage points, it has grown 4.1 in the 10-17 demo, 3.2 in 25-39 and a staggering 6.2 in 55-64, where incidentally the local ABC station has shed 6.1 percentage points of its listeners. Clearly the station will be one to watch over the course of the year.

Nova's Kate, Tim and Marty shot to the top of Brisbane's drive slot, in the last set of ratings and they continue to hold the spot with a majority 14.5 percentage point share. There has been no change in audience figures for the timeslot, as Hit 105.3's Hamish and Andy show comes a second close with 12.5 percentage point audience base. 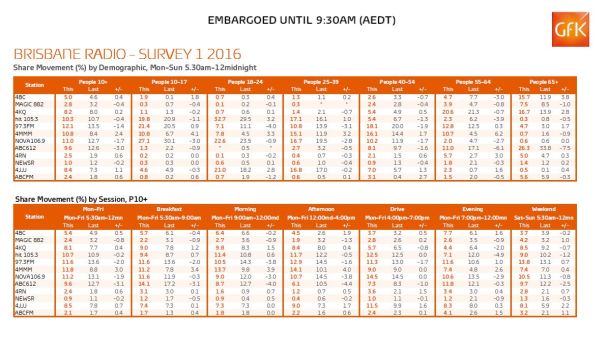 Mix 102.3 has lost its market dominance in Adelaide after capturing a 13.0% audience share last year. The station is now in third place after slipping to 11.4 percentage points, trailing third behind ABC891 which has grown 0.2% points to 12.6% - putting it in poll position – and Nova which has climbed 0.4% to 11.6% points.

In the drive slot, Nova 91.9 overtook Mix 102.3 for first place late last year and continues to hold the spot. Nova boasts a 14.2% shareagainst nearest competitior hit107 which trails with an 11.1% point share. 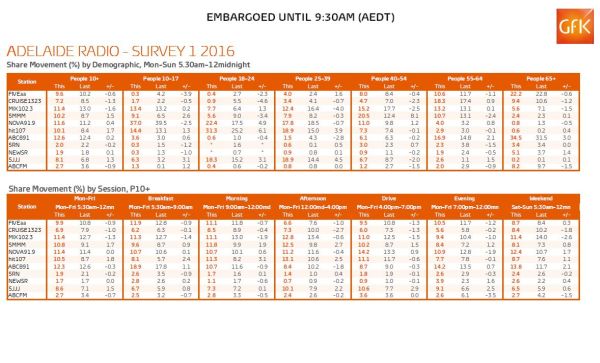 Overall listeners in the first radio ratings of the year sees Mix 94.5 continue to be Perth’s favourite station overall, with a listenership of 15%.

ABC720 has held onto its place in Perth as the most-listened to breakfast show, scooping an audience share of 16.2% - a rise of 1.2 percentage points compared to its end of year (2015) radio ratings' share of 15%.

Despite a climb of 0.9 percentage points in drive time, taking it to a 15.8% share, Nova 93.7 dropped out of its top spot position in drive to number two. Mix 94.5 now sits in the prime position at number one in drive with 15.9% - having climbed 1.8 percentage points. 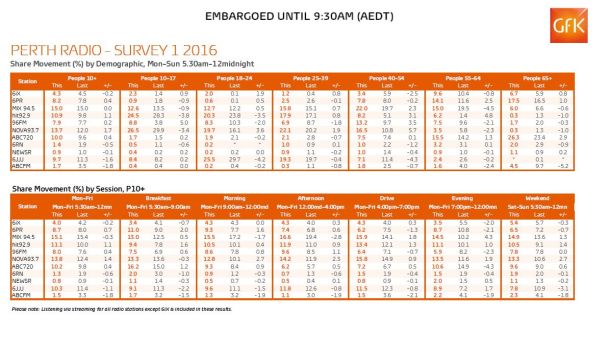