Radio Ratings: Sam and Rove struggle to move the dial 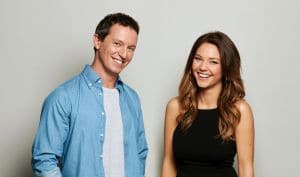 Kiis hosts Kyle and Jackie O have held onto their lead in the Sydney FM breakfast stakes, despite dropping 1.2 percentage points, while 2DayFM's Rove and Sam remain flat on the second survey of the year.

Kyle and Jackie O did top their Australian Radio Network (ARN) stablemates at WSFM, Jonesy and Amanda who finished this survey on 8.0% audience share after gaining 0.9 percentage points over the period.

2DayFM's Hamish and Andy picked up another 1.1 percentage points with 6.6% audience share.

3AW has has made huge gains in both breakfast and drive to dominate both of the key slots, largely at the expense of ABC774, as the drive FM battle heats up.

The major gains were made in baby boomers, with more than a quarter of 55+ listeners tuning into 3AW.

ABC774 shed 2.7 points to slip to 13.6% audience share overall. This is cancelled out the gain ABC's John Faine made in the previous ratings period.

In the breakfast battle of FM stations, Triple M still leads despite shedding 0.2 points to 8.3%. SCA stablemates, Fox's Fifi and Dave, gained a solid 0.4 share to edge second with 7.1% audience share, while similar gains have Gold (6.8%), Kiis (6.7%) and Nova (6.1%) slowly gaining share in a competitive market.

Matt and Meshel, in only their second ratings period, gained 0.4 points to 8.8% aiudience share while Nova's Kate, Tim and Marty have made solid headway, gaining 1.1 points to an 8.6% audience share.

On the flip side, Triple J has had a shocker, shedding 3.8 points to 5.1% share overall.

Although radio chiefs have highlighted Melbourne breakfast as a key battleground, it is drive FM where the fight is really on.

ABC891 continues to hold its dominance in Adelaide capturing a 12.3% audience share in total audience, despite dropping 0.3 percentage points from the last survey. Mix 102.3 has been pushed down to fourth place, holding its 11.4% point share, with Triple M and Nova both at 11.5% share.

ABC891 continues to rule in the breakfast slot; however it has slipped 1.6 percentage points, from 18.9% audience share since the last survey to 17.3%. In the FM stakes Mix102.3 still rules the roost with 12.3% audience share, followed by FIVEaa.

In the drive slot, Nova 91.9 holds its pole position, boasting a 13.7% audience share with hit107 trailing close behind with 13.6% audience share. Nova is down 0.5 percentage points on last survey.

Looking at total listenership in the second radio ratings period of the year, Perth’s top station, with a 13.8% share, was Mix 94.5. Despite holding the top spot, it dropped by 1.2 percentage points, allowing contender Nova 93.7, with 13.7%, to edge closer in second spot.

After dropping out of third spot in the first radio ratings of the year, Triple J has since added 0.9 percentage points, reaching 10.6%, meaning it climbs back up to third place. The move sees Hit 92.9 knocked from third spot to fourth position.

The top three stations during breakfast remained the same as in the first radio ratings. ABC720 has held onto its place in Perth as the most-listened to breakfast show, earning an audience share of 15.5%.