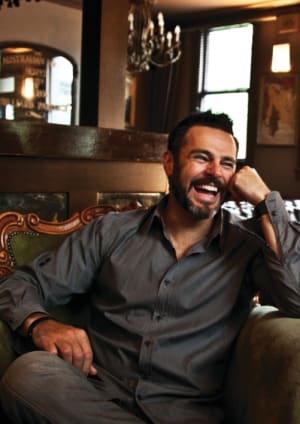 His arrival coincides with a rebrand from Y&R that sees the agency quietly drop its decades old George Patterson branding, aligning all agencies under the global “Y&R ANZ” brand and a new positioning - Conspicuous Creativity.

It's the latest example of an Australian brand being dropped for a global name.

Nagy will lead the creative vision for Y&R clients in the three Y&R Australia offices, including Sydney, Melbourne and Brisbane.

He will report to Josh Moore, regional CCO of Y&R ANZ, and will be based in Sydney.

“Paul is exactly the leader that Phil and I have been looking for the last eight months. He shares our philosophy of creating brilliant work for our biggest clients that drives exceptional ROI,” Moore says.

In a refreshed management lineup in the Sydney office, Nagy joins Sydney MD, Sasha Firth who was promoted to the role in August last year and will work with current ECD’s Bart Pawlak and Dave Joubert.

“The thing that struck me most about meeting the team at Y&R, both locally and internationally, was their excitement," Nagy says.

"Like me, they don't use a lot of big ad words, but are just genuinely passionate and excited about inspiring a culture that strives to create interesting, hardworking brands for our clients. The agencies, both here and in NZ, have a history of doing some of the best work in the world, so I’ll be doing my best to continue that across Australia long into the future.”

With Nagy taking creative lead for Australia and New Zealand, he continues a trend in the industry of creatives stepping up to national roles. First Jason Williams stepped up to Leo Burnett national chief creative after 10 years as the Melbourne ECD.

The end of George Patterson

The rebrand from GPY&R to Y&R signals a move to align globally with the group and marks the end of an era for George Patterson.

It was one of Australia's biggest agencies until 2005 when it was bought by WPP and merged with Young & Rubicam.

It launched in 1934 and its founder is described as one of Australian advertising's most shrewd visionaries of the 20th Century.

"The rebrand is part of our goal to become the first truly Trans-Tasman creative network and will better align us with our international Y&R counterparts. It also coincides with the launch of “Conspicuous Creativity”, a new way of creating and evaluating our ideas right across all our agencies in ANZ," he says.

"While in Australia the alignment will see the George Patterson name go from our external branding it will remain an important part of our agency’s DNA. It has played an important role in Australian advertising history and we will maintain its legacy by continuing to attract the best talent and producing the world-class work our clients have come to expect from us."

A number of local Australian agency names have been dropped recently as part of global alignments. Last year, Publicis retired the Mojo Sydney name in favour of Marcel, TBWA dropped Whybin and WPP has set out to merge its local agencies, starting with AKQA and DT.

Want to take a look back at the archives of George Patterson? Read this.