What does Andy Lark's departure mean for Foxtel agencies? 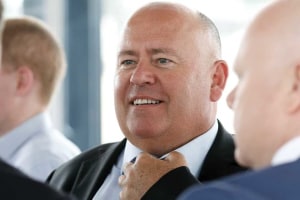 Andy Lark's shock departure from Foxtel could have wider ramifications for the company's creative agencies.

Lark, who joined Foxtel as chief marketing officer 10 months ago, led a review of its creative agency arrangements and quickly appointed DDB Sydney to lead its brand and retail work.

After Lark joined, TBWA Sydney resigned the account to take on the Amazon business. Prior to TBWA and Foxtel splitting, AdNews understands Lark was reluctant to meet with the agency.

Lark then appointed Marcel in April to work alongside existing agency With Collective, which was hired by former Foxtel CEO Mark Buckman last September.

AdNews understands Lark may have edged out Marcel and With Collective in favour of DDB Sydney, but both agencies remain on roster executing smaller projects.

It's thought Lark was also looking to work with BWM Dentsu on various projects, but the agency was never officially appointed.

A source close to the Foxtel business said "confusion has reigned supreme" within the marketing department with agencies left "paralysed" by a lack of clarity on their scope.

Now Lark has left, these agency relationships could be impacted by the arrival of CMO Kieren Cooney, who joined the business from REA Group.

Cooney worked at DDB-owned Interbrand for three years prior to REA Group, so has a unique understanding of the Omnicom business.

AdNews understands Cooney was considering reviewing REA's creative agency prior to his exit.

Another player within Foxtel that could drive an agency shake-up is Adam Ballesty. Ballesty joined Foxtel Sports as head of marketing from Diageo, where he established a strong relationship with Leo Burnett, particularly with ex-CEO Pete Bosilkovski who is now at Y&R.

DDB Sydney has just produced its first major work for Foxtel in promotion of its recently launched Fox Cricket channel. The success of this campaign will play an important role in the ongoing relationship of DDB and Foxtel.

More work from DDB Sydney is expected in coming weeks as Foxtel prepares for its summer and Christmas push.

Beyond the marketing department, Foxtel has also had wider leadership changes with Patrick Delany replacing Peter Tonagh in January.

Last week, Foxtel outlined how it plans to leverage its $1.2 billion investment in the cricket media rights and Delany shared how its sponsorship approach will break the mold.