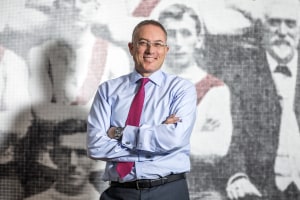 The move comes ahead of a merger between Foxtel and Fox Sports but has come as a surprise. AdNews understands both CEOs were considered for the CEO role of the merged entity and Tonagh will leave News Corp.

As final arrangements for a combined Foxtel and Fox Sports Australia company are trashed out, the sports broadcaster will be led by its COO Peter Campbell.

Campbell joined Fox Sports Australia last year after four years as GM of media and broadcasting at the AFL.

In a sudden announcement, News Corp’s chief executive Robert Thomson thanked Tonagh for his service to Foxtel, News Corp Australia and REA Group "during years of great change and challenge in the marketplace".

“There is no question that Peter Tonagh has been a thoughtful, far-sighted leader and his positive influence will resonate for many years to come,” Thomson said in a press statement.

“Patrick’s astute and innovative leadership of Fox Sports, combined with his broad experience during his nine years at Foxtel, make him the ideal person to take the helm at such a profoundly important moment for Foxtel.”

Tonagh added: “With the process of bringing Foxtel and Fox Sports together proceeding towards a conclusion soon, it is the right time for me to move on and put Foxtel into the hands of the person who will lead the new company. I have known Patrick from his years at Foxtel and Fox Sports, and he is the right person to be at the helm in this new era.

“I am proud of what Foxtel has achieved in recent years. We have dramatically lifted the quality and quantity of Foxtel’s programming while making it more available and affordable for millions of Australians.”

Delany praised Tonagh for his contribution to Foxtel and said he was delighted to now lead the company.

“Peter leaves a great foundation at Foxtel. It has extraordinary assets, great people and a deep subscriber base. I’m excited by opportunities at both Foxtel and Fox Sports to give consumers something better, different and special,” Delany said.

“Bringing sports and entertainment to the people of Australia has been the passion of my professional life.”

Delany has led Fox Sports since 2011, expanding its coverage to deliver more than 10,000 hours of live action every year, including full coverage of the NRL, AFL, Super Rugby, A League Football, F1 and Supercars.

The former Gilbert & Tobin lawyer began his career in television in 1998 at Southern Star Entertainment, where he successfully revitalised and relaunched the Lifestyle Channel, Channel [V], Music Max and The Weather Channel for the Foxtel and Austar platforms.

In 2002, Delany was appointed director of digital at Foxtel, playing an instrumental role in the rebirth and reinvigoration of Foxtel as a digital product, while reshaping its consumer proposition.

In 2005, he was appointed as Executive Director of Content, Product and Delivery at Foxtel where he introduced product and service innovations including Foxtel iQ, Mobile Foxtel, Foxtel On Demand, HD, 3D, Foxtel on Xbox and Foxtel on T-box services, as well as Foxtel’s availability on Virgin Airlines.

In 2007, Delany renegotiated Foxtel’s long-standing movie deals, which were seen as a turning point for Foxtel profitability.

In 2011 he became CEO of Fox Sport Australia leading a revolution in sports TV coverage, which included the most extensive package of live AFL and NRL coverage in history.

During his seven years at Fox Sports he has significantly increased audience, profitability, expanded the digital footprint and overseen the introduction of new technologies and approaches, including in-play cricket helmet cameras in 2012 and user generated content into live broadcasts.