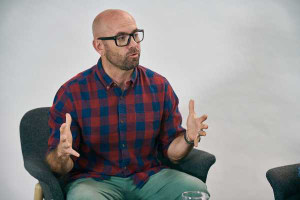 The consumer marketing specialist, who "loves brands" and has spoken at the AdNews Media & Marketing Summit in the past, has been Diaego's top marketer for nearly five years and has been with the company for nearly seven years.

It's unclear at this point what Ballesty's next step is but Diageo confirmed the move to AdNews.

Andy Oughton will take on the role, returning from the UK where he had been Diageo's innovation director for Africa.

In his LinkedIn bio he describes his role as "a dream job.... moving mountains and creating giants.... because giants dream big".

Diageo Australia MD David Smith, says: “Adam has had a sensational impact on this business over his tenure. His accomplishments are numerous, but it’s hard to trump the turnaround of our very own Bundaberg Rum. Adam has led a transformation of this brand that has seen it return to growth for the first time in years.

“He’s helped shape a bold transformation of our premix offerings that has driven that category back into growth and he’s built a hugely talented Marketing team. I thank Adam for his stewardship, his leadership and his passion.

“Whilst we lose Adam, we’re delighted to welcome back Andy Oughton who will head up Diageo Australia’s marketing and innovation team. Andy first joined Diageo Australia back in 2002, he’s a highly regarded leader and has achieved great success during his time in the UK, expanding brands into new categories and overseeing a robust innovation pipeline.”

In March this year Diageo invested $15 million into Johnnie Walker's biggest national brand campaign in a decade. Developed in partnership with Diageo’s longstanding creative agency Leo Burnett Sydney, the TV ad follows the story of a university student who decides to take the step to follow true passion; his art.

Ballesty says he is delighted with his time at Diageo Australia, the team, and what they have achieved over the past five years.

“It’s with this deep appreciation for the business that I am delighted to say we have worked together to ensure we can bring Andy home and let him drive the business forward into the next chapter," he says.

"I leave Diageo with lifelong friends, and personal and professional growth that will hold me in the best position possible into the future.”

Oughton says while spending the last couple of years in the UK leading the African innovation team has been an amazing adventure, he's thrilled to be returning home and to be re-joining the Australian marketing team.

Oughton will return later this year for a transition period with Ballesty who will leave the business in the coming months.

In 2016, following a global review, Diageo Australia bucked a global trend by sticking with a one-agency Publicis Groupe model, with brand and media strategy led by Leo Burnett and Spark Foundry responsible for media buying execution in the local market. Australia was the only market in the world not to fall in line with the global structure.

Speaking to AdNews in March, Ballesty discussed how the facts around Australian alcohol consumption declining are wrong, with the company enjoying strong growth across its spirits category. See more here.