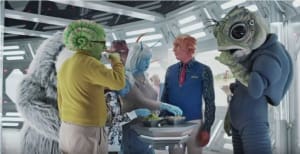 Doritos Crash the Super Bowl spots and an Avocados from Mexico ad with colourful aliens are generating the most social media chatter in the first half of Super Bowl 50.

An Australian ad made the final three in the Doritos Crash the Superbowl competition.

The sentiment towards ads has been more positive than the actual game.