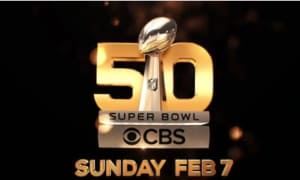 While many fans will be tuning in to watch the Denver Broncos battle it out with Carolina Panthers in the NFL's Super Bowl 50, it is the action off the field that will have adland eyes glued to the box, with the usual heavyweights Budweiser, Doritos, Skittles and Coca-Cola running ads alongside new entrants such as Amazon.

It's often dubbed the most anticipated sports (and adland) event in the US calendar and enjoys a strong global following - being broadcast in about 180 countries in more than 25 languages.

In an Aussie first, this year Channel Seven is hopping on the bandwaggon by showing the game live (but with Ausse ads) from 10am today.

Speaking to AdNews, Seven's chief revenue officer Kurt Burnette, says Seven's live streaming is expected to be a welcome addition for fans - as it saw recently with the tennis, those who were at work or out of home were using its live streaming.

"There is no better spectacle than the NFL on the television screen but convenience has proven to be a powerful value exchange for fans who want to watch their favourite content wherever they might be," Burnette says.

"The NFL and the Super Bowl have seen a significant increase in interest and investment this year. The Jarrod Hayne Factor has certainly added to that interest along with the interest that comes from the halftime entertainment – with performances from Beyonce and Coldplay."

CrownBet and Harvey Norman are two of Seven's sponsors for the local showing. Burnette said the broadcast will carry the Australian linear broadcast ads and follow the "made for TV" break structure the NFL creates for the rights holders. He added that each time the stream is started the user will also see a local "smart pre rolls " -  to launch the vision of what promises to be one of the biggest NFL games on record.

See here for 15 Super Bowl ad facts that you need to know.

Many of the brands have released online teasers ahead of the final to drum up hype.

AdNews approached digital marketing technology firm Amobee for insights on how consumers were engaging with Super Bowl 50 advertisers between 26 December 2015 to 26 January 2016.

Bud Light released a Super Bowl teaser on 21 January with comedians Amy Schumer and Seth Rogan getting ready for their Bud Light Party - the “party” being a play on political parties. Since the Bud Light Super Bowl teaser ad first went online, digital content engagement around Bud Light increased by 661%.

Budweiser has had the most popular Super Bowl ads for the past two years, and there is generally a high level of anticipation around their entry each year. This year Helen Mirren stars in a Budweiser ad that tackles drin driving.

Skittles revealed a GIPH showing that Steven Tyler of Aerosmith is going to be featured in its Super Bowl commercial, and Shock Top released a teaser starring comedian TJ Miller and a talking to a beer tap. This increased digital content engagement around by 479%.

Nationwide was 39%, despite not running an ad this year. In 2015 the Nationwide ad lit up Twitter from memes to comments about how an ad about childhood death ruined the Super Bowl for everybody. Check out Life's confronting. Advertising should be too.

It seems it is going to be a strong Super Bowl for brewer Anheuser-Busch, which owns Bud Light, Budweiser and Shock Top, three of the top four most associated brands, according to Amobee.

Salesforce has also launched a big game social tracker that tracks social sentiment throughout the game. This includes a list of the the top ads that have been mentioned. 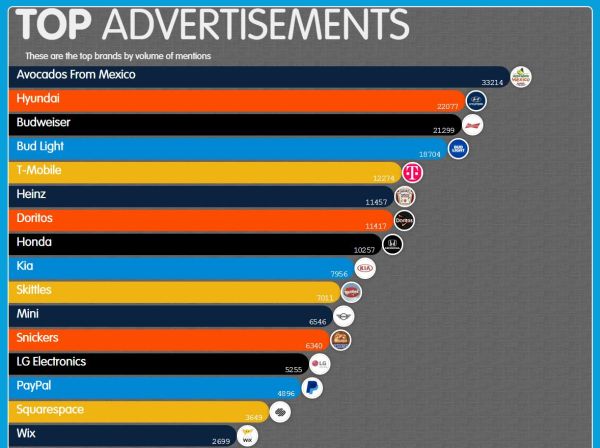 This year, Australia's Peter Carstairs will attempt to crash the Super Bowl. Carstairs is one of the three chosen out of a field of 4500 entries, with his ad 'Ultrasound', the tale of a baby in utero who really, really wants Doritos.