Aussie misses out on Doritos Crash the Super Bowl competition 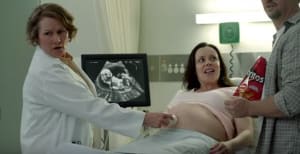 Australian director Peter Carstairs and a creative team from Cummins&Partners are behind the only local ad to ever air during the Super Bowl but have just missed out on taking home the winning prize in the Doritos Crash the Super Bowl competition.

Carstairs, from production house Mr Smith, is the director of the commercial Ultrasound, which was written by Cummins&Partners creative team Heath Collins and Liam Jenkins.

Ultrasound clocked up more than 60 million views online after being shortlisted in the competition, but missed out on the final prize in favour of the ad Doritos Dogs.

Ultrasound shows a pregnant mother with her partner, who is munching on Doritos in the consultation room, when things take an unexpected turn.

The competition allows creatives to have their work aired to an audience of millions, with more than 100 million people seeing Ultrasound when it aired earlier today. It is the first time in history an Australian commercial has aired during the Super Bowl broadcast.

The Doritos Crash the Super Bowl competition has been running for 10 years and sees creatives make their own commercials for the brand, for a prize pack which includes US$1 million and the chance to work with director Zac Snyder on a Warner Brothers' film. This year is the final year of the competition.

Ultrasound clocked up more than 60 million views online after being shortlisted in the competition.

It was up against two other ads: Doritos Dogs and Swipe for Doritos.

In January Carstairs told AdNews that he saw the competition as his ticket to adland.

“I love ads and I don't ever intend to stop making them. I've made one movie, hopefully I will make more, but my end game is to keep making ads,” Carstairs said.

"Having an opportunity to write a Super Bowl script isn’t something that comes up very often down here in Oz so when Pete came to us from Mr Smith and asked us to write him a script for the competition, we obviously jumped at it," Couzens says.