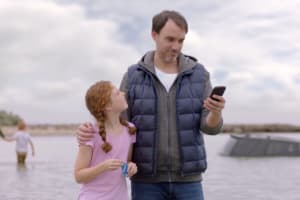 The Carsales ad deemed a "missed opportunity" by this week's creative

This first appeared in the AdNews print magazine. If you want to read it before it goes to press, you better subscribe here.

What a mix. Hollywood celebrities, a paralympian and CJ the feisty journo. Humour, sincere voiceovers and an opera. Some classic advertising techniques on show in these ads. But, there weren’t any big ideas that blew me away and made me wish I had made them.

There’s some nice big ads here. Some in the physical big sense and some that are shot small, but feel huge. And then some in between.

Sian Binder: Ambitious news reporter chases meteor and becomes prime time anchorwoman. In a sedan. This ad has great production values, good casting and a nice packshot (with purple smoke and fire!). The dreams campaign has been running for so long it must be a challenge when briefs land in the creative department. The track is catchy, but maybe it tries too hard to land the idea. Credit for storytelling, but a bit overwhelming for a 60-second ad.

Sam Chappell: Really enjoyed this. Lovely to see brands tipping money into big, action–packed ads. When I first saw this on telly I thought it was from overseas, so was delighted when I found out it was locally made. There seems to be less and less of this about these days, which is a real shame. Well done. Entertainment for everyone.

2. This is Football - Optus by M&C Saatchi

SB: When I saw this on TV (yes, I’m one of the few who still watches live TV), it got my attention. I’m a football fan and I’m a fan of Idris Elba so it was a winning combo. Anthemic and atmospheric, the tone will certainly appeal to the EPL audience. I was surprised when the Optus logo appeared at the end. But I guess that’s the point. Nice grade too.

SC: I thought this was great. Really simply shot, but feels like a much bigger ad. There have been quite a few shonky, derivative football ads in recent times in Australia and this feels like a new, fresh way in.

3. We can't all be great - Carsales by Whybin\TBWA Melbourne

SB: It took me a while to think of something to write about these. ads. They’re well made, but left me feeling a bit ‘meh’. I think it’s because you can see the brief in them and it all feels like box ticking. Presenters who fit our three key demographics, tick. Delivering product facts, tick. Factual, yet warm tone, tick. Deliver ‘easiness’ message, tick. They do the job and the Carsales marketing department is probably stoked. But, I think they’ve played it safe and missed an opportunity to create an interesting and different brand personality.

SC: Not quite sure about the old ‘you can’t do that, but you can do this’ strategy. It’s a bit of an easy trick. Either way, I think the humour could have been pushed a bit further, but who knows what’s gone on behind the scenes.

SB: With these ads, Foxtel is finally using its celebrity the right way. Chris Hemsworth plays Chris Hemsworth perfectly, an engaging performance that audiences will love. Nicely written and produced campaign with just enough humour. Shout out to the creatives for their inclusion of clappy lights.

SC: I love these. Nicely written, nicely shot, nicely underplayed. Great that he’s sending himself up and it feels like he’s added quite a bit to these himself too. Good to see Foxtel doing smart work, which I think it needs to being doing now it’s got all this new competition. Good work Whybins. Simple and neat.

SB: This ad made me ‘falafeel’ good. The kebab shop is a bit of a first thought for a Dry July brief, but this has been executed really nicely. Watching it was like stumbling upon a late night Almodovar movie on SBS. Lots of meat stroking and
random imagery. I’m going to have the image of a man’s goateed mouth on a hand etched in my mind forever.

SC: Nice way in, and some funny moments along the way. I did feel that it went on a bit too long. Perhaps a change of scene midway through would have helped? Still, definitely stands out.

SB: Chobani’s Olympics campaign features Melissa Stockwell, ex-military and current team USA paralympian. An inspiring sportswoman with a big story. But the VO in this ad is so confusing. Who is she talking to? The ocean? Her kid? The ladybug? And whose shoulders is she standing on? The copywriter is writing in riddles and I need answers! Maybe it’s an American thing. It feels way too serious for yoghurt, but hey, you’ve got to love a client that’s brave enough not to show the product or pack at all.

SC: There’s a lot of this kind of stuff around at the moment. Looks great, and I like the sentiment, but I worry that it will get lost in the sea of other Olympic ads swimming around.