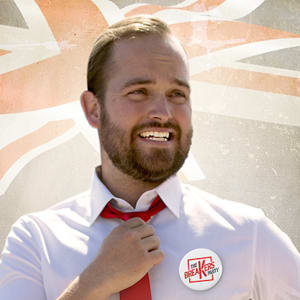 It's all about the work and Creative Choice is where we send in the pros to critique the latest offerings from ad land.

The Core Agency founder Jon Skinner and Disciple creative partner Pete Buckley take on the challenge for this week's Creative Choice, putting their creative eye to work from KitKat, Save the Children, Continental, 5 Seeds Cider, PEA and GE.

Jon Skinner: This batch of work proves to me that a fact well told can be far more powerful than just filming fiction. The best ideas here amplify truths and show them in an unexpected way that makes the viewer think, not just watch.

Pete Buckley: "This is a good snapshot of where the business is today. There’s a social experiment type concept, a topical, the brutal slice of reality, some non-sensical work and some truly weird stuff.”

JS: Yes, it’s that time again in the electoral cycle when some brands dare to serve up the old tried and tested fictional political party idea. This time around Kit Kat gets out there early with a film overflowing with puns and try-hard irreverence for The Breakers Party. The brand strategy is so obvious and laboured that it starts to feel like you are watching the planner’s PowerPoint presentation. If you are going to rehash old ad formulas, then the script and execution have to blow you away. This one doesn’t get my vote.

PB: Unfortunately for the general public the Federal election campaign has already been going too long and it’s only just started. Although this is a good attempt a better idea would have been giving us a break from election advertising not add to the noise. Perhaps if they were sliced up into lots of little breaks they would have been pretty good as there are some genuinely funny moments here.

2. Save the Children – the most shocking second a day by Don't Panic London

JS: This stunning film reframes the refugee issue using powerful imagery and a bold quick-cut style. Featuring a child at the heart of the story, it takes the viewer on a shocking journey and forces reappraisal of the plight of refugees. Having a child around the same age as the girl in the film it really does bring it home and make you think. Powerful stuff.

PB: Powerful and hard hitting because it gets to the heart of the story and ultimately the truth. With an issue as pressing as this you only ever get snippets here and there across the media so it’s difficult to get the whole picture. For most people it’s difficult to get a handle on what’s really happening. As a result it’s hard to build empathy and ultimately create action. This is a powerful and gripping piece of film so well done to all involved.

JS: Coming from a brand with a heritage of just serving up ads showing families eating around the kitchen table, this idea is a nice surprise – because it’s an idea. It uses different flavours of food as the rationale for matching singles. It makes for entertaining content as you ultimately want to see if their mutual love of burgers, pasta or chilli is enough to seal the deal. And if the film is to be believed – they are. It’s a nice idea executed with refreshing authenticity for Continental.

PB: Great idea and fantastic way capture the beauty of sharing. Sure the social experiment thingy is getting a little tired and it did become schmaltzy at the end but overall “love at first taste” works well and is a really good platform. Good job, but who’s stacking the dishwasher?

PB: “Plant a seed" is a pretty good line but I really missed something here because after repeat viewings I am no closer to understanding what’s going on and what they could possibly be trying to tell me. I love the track and some great production values but it's ultimately pretty confusing.

JS: Being a dog lover with two little sausage dogs, I braced myself for images of terrible animal cruelty as I clicked the link to watch this video. Thankfully, the creatives took a different path and chose to channel Jim Henson and created a quirky and entertaining mashup of cute meets cruel. To get the message across, the cuddly puppet canines sing along about vile puppy farming practices. It works hard to deliver an unpalatable message in an unexpected and engaging way. I won’t be able to look at the cute little puppies in the pet shop ever again.

PB: Two competing approaches to the same message here. There’s the attempt at cut through and doing something fresh, then the insurance policy at the end in case nobody gets it. For me it’s one or the other and caged animals is always going to be more powerful than the muppets.

JS: I like this film as I can imagine how uninspiring the creative brief could have been. The idea they created lives in a world where it can start raining octopuses at any moment. And the public are fine with it because should a tentacled critter knock out the power grid, GE can re-route the power in a blink. I would have swapped the cheesy VO for a super and not had the croc, but there you go.

PB: If it was for BBQ’s Galore I’d be into it but you can hear the request “we want something crazy and cut through like the Super Bowl ads”. Cue creative team “what about raining octopuses".