GPY&R Brisbane has been nominated in three categories of the Media Lions including Use of Mobile, Use of Ambient Media and Public Health and Safety.

Atomic 212 Sydney also appeared on the Media Lions shortlist for its Lucy the Robot effort. The Double Telepresence was pressed into action by Atomic 212's marketing communications manager Lucy Kelly, who used the technology to circumvent the inclement weather queuers were  suffering under in their wait for the release of the new iPhone 6s. 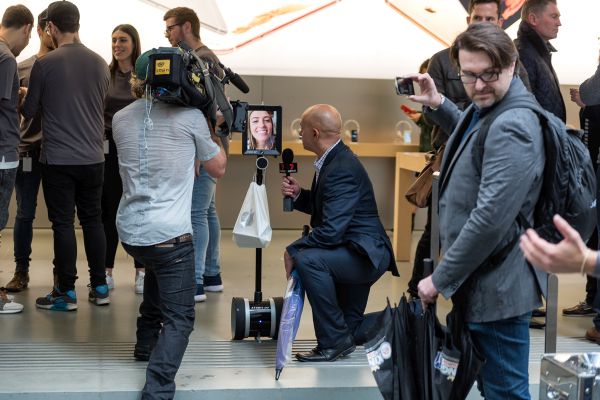 Above: Atomic 212's Lucy the Robot

In total, Australia scored 21 nods in the Media category, meaning an Aussie could be a front runner for the gong.

Grey Melbourne also received two entries for its This Bike Has MS campaign, which has won a Silver Lion for Health.

Whybin\TBWA Sydney and Eleven's Uncrushable campaign for M.J. Bale appeared on the shortlist twice, once in the Use of Stunts category and another in the Fast Moving Consumer Goods category.

DDB Sydney’s #ComeOnIn campaign continues to dominate at Cannes, with five nominations for the Mobile Lions.

The campaign for the Sydney Opera House has been shortlisted across the Activation by Location category, Content for User Engagement category, Co-Creation and UCG category, Targeted Communications category and the Social Business category.

The aim of the socially-led campaign was to encourage people to experience more of what the Opera House had to offer, inviting people to the destination through user Instagram images.

Leo Burnett Sydney made the shortlist four times for its work with Toyota, Samsung and Diageo Australia.

The US account for 15, and Australia 11, of the 73-strong shortlist, which spans 20 countries.

McCann Melbourne’s Emotional Trailer is one of Australia’s front runners to take home a Creative Data Lion, shortlisted in three categories for the work.

Created for the Melbourne International Film Festival, McCann built a movie chair that allowed people to physically experience the emotions of a film before they saw it.

Clemenger BBDO Melbourne and DDB Sydney made the shortlist twice, Clemenger for its Rate my Roof campaign for Origin Energy and DDB Sydney for its work with the Opera House.

Leo Burnett Sydney, GPY&R and AFFINITY all received a nod in the shortlist.

While Aussies scored 11 entries to the Cannes Creative Data Lions, only Leo Burnett and Saatchi & Saatchi made the shortlist for the Innovation Lions.

Aussies have scored 17 finalists at the shortlist stage of Cannes Cyber Lions, led by Leo Burnett Sydney with five finalists.

Leo Burnett received nominations across three categories for its work for Canon Australia. In the campaign, Leos experimented with the power of perspective in portrait photography, demonstrating that a photograph is shaped by the person behind the camera.

Clemenger BBDO Melbourne and DDB Sydney have both been shortlisted three times, with Leo Burnett Melbourne and GPY&R Melbourne following with two entries.

GPY&R Melbourne, Minus 18, You're Accepted

Check out these shortlists below: