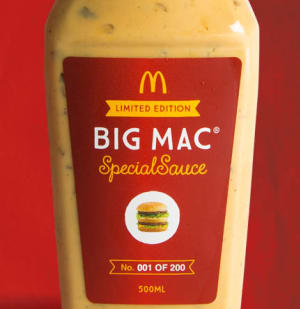 DDB Sydney, Leo Burnett Melbourne and McCann Melbourne make up the trio of creative shops in the shortlist for the Creative Effectiveness Lions.

The #Macitbetter campaign for McDonald's Big Mac got DDB Sydney its position.

Big Mac sales were declining among young Australians so as “everyone loves Big Mac Special Sauce”, for the first time ever, McDonald's made the sauce available outside the burger.

Working with DDB, Maccas produced limited edition bottles, auctioning #001 on eBay. It sold for more than $23,000 and news of it went quickly spread across the globe. As a follow-up, limited edition sample tubs were then released and Australia was challenged to respond by 'mac'ing anything better and sharing it online. People did share online, in their thousands.

The agency launched a new kind of loyalty program: The Tigerair Infrequent Flyers Club. It was a real program that makes low-cost, no-frills flying a badge of honour, targeting people who hardly fly at all.

The campaign captured the attention of the media and passengers alike and there were more than 500,000 Infrequent Flyers in the Tigerair database, contributing to Tigerair’s first quarterly profit in five years.

Leo Burnett Melbourne also made the shortlist for its work for SPC Ardmona, with its #myfamilycan campaign.

Featuring six real-life Victorian farming families, the actual people who grow the food for SPC, the initiative, made up of short films released on social media, recognised that consumers craved assurance that the food they eat is locally grown.

The campaign started with a community Facebook page and one tweet, but soon snowballed to create a national wave of support.

The three Aussie shops battle it out against 20 others agencies, largely from the US and UK - with contenders also appearing from BBDO India, Leo Burnett Madrid, JWT Cario – and more.