You can crush the man, but can you crush the suit?

Australians travel further for business purposes than any other nation, which is why MJ Bale produce durable 100% Australian Merino Wool suits, apparently.

To prove this, Whybin\TBWA\Eleven and MJ Bale have conducted a "real time travel torture test" through Facebook and Instagram.

To shoot its 2016 winter campaign, MJ Bale dressed an unsuspecting model in Sydney for a fashion shoot that was happening in London. The route to London was fierce, with five days non-stop travel across nine countries and 10 modes of transport all in one suit.

As soon as the the model and the small crew arrived in London, they began shooting the 2016 MJ Bale winter campaign.

Model Tom Bull was a broken man but the suit was impeccable, proving that you can crush the man, but you can’t crush the MJ Bale suit.

MJ Bale founder Matt Jensen says: "With Australian men travelling more for business than any other nation, arriving looking as good as when you left is a struggle. We want to help gents stay looking impeccable and ultimately professional for business, no matter how many miles they’ve covered." 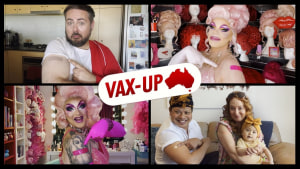