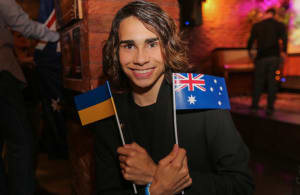 Ten's MasterChef pulled in an average metro audience of 734,000 viewers. The program featured a guest appearance from Attica's head chef Ben Shewry and was the second most popular show among 16-39s and third with 18-49s however fell to fifth in the 25-54s demographic.

Aussie singer Isaiah Firebrace, who won last year's The X Factor, placed in the top 10 of the comp, coming in ninth with his performance of Don't Come Easy. Australian-Danish singer Anja Nissen, who won the third series of The Voice Australia, competed for Denmark and came in at 20th.

Last year's screening likely drew in a larger crowd being that the country's representative, Dami Im, came second in the competition.

This year's final saw a Ukrainian prankster donning the Australian flag, crashing the stage and mooning the audience during a performance.

Last week's ratings saw Seven win the overall prime time channel share with 38.7% of viewers, followed by Nine with 34.9% and Ten with 26.4%. Nine's The Voice was the top program of the week overall, with an average metro audience of 1.1 million for the week.

Check out a wrap of last week's ratings below: