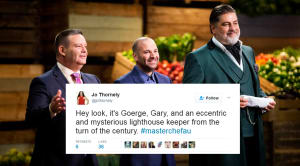 The Voice pulled in a metro audience average of 1.08 million last night – the leading show in the prime time slot. The show is averaging 1.14 million viewers.

Following closely behind with 767,000 viewers, the sixth episode of Ten's MasterChef had contestants work with ingredients from a pineapple and prawn mystery box.

While The Voice led the night, MasterChef was more popular among younger audiences, with 243,000 of its viewers in the 16-39 age bracket compared to 201,000 for The Voice.

As the audience skewed older, The Voice picked up a greater audience share, winning the 18-49 and 25-54 demos ahead of MasterChef.

House Rules lagged behind The Voice and MasterChef across major demos but still beat MasterChef in total people, indicating the reno format is attracting a lot more baby boomers than its rivals.

Nine's current affairs program 60 Minutes, which did a segment on shark attack survivor Glenn Dickson, drew in a high metro average audience of 715,000, making it the sixth most watched program of the night.

The A-League grand final between Sydney FC and Melbourne Victory attracted an average metro audience of 254,000 on SBS and 275,000 on Fox Sports, with 460,000 tuning in to watch the Sky Blues hold aloft the trophy.

Overall, last week saw a race emerge across Nine, Seven and Ten, however Nine's main channel won the key demos and The Voice has been consistently performing well since its launch, Nine’s highest rating show of the week was Sunday’s episode of The Voice which drew 1.19 million.

For a full wrap of last week's TV ratings, check out the graphs from Nine below: