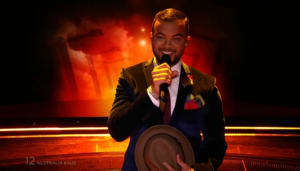 SBS has danced to the Eurovision beat while Seven rode Catching Milat to a dominant weekend showing.

The Eurovision Song Contest, featuring Australia's Guy Sebastian as a wildcard entry, drew strong numbers for SBS even if the evening sessions were repeats.

Saturday's evening run of the second semi final grabbed SBS 639,000 metro viewers, as viewers tuned in on an otherwise quiet evening for the free-to-air networks.

The second semi-final grabbed SBS 639,000 metro overnight viewers according to preliminary OzTAM estimates, with only Father Brown on the ABC a higher rating non-news program.

Fewer tuned into Sunday night's presentation of the Eurovision final, when Guy Sebastian performed for the first time.

The numbers were likely affected by heavy social media activity around #SBSEurovision, and the fact many of those who caught the Saturday repeat were determined to wake up bright and early for the live final.

The earlier showing reportedly brought in an average metro and regional audience of 325,000, giving it a 40.6% share in the timelot.

Combined, the SBS live and replayed broadcasts had a unique Twitter audience of 215.4K and generated almost 8 million Tweet impressions during the screenings. This made #SBSEurovision number one as the most social program on the Nielsen Twitter TV Ratings.

However, its numbers may have also been affected by a stronger line-up put out by the main FTA channels.

Seven also put up a whole house reveal on House Rules, drawing more than one million for the occasion.

The network grabbed a 33.9% share for the evening, beating Nine by more than 10 points, which had a 21.6% slice of the viewing audience.

You can look at the numbers for yourself below.