MKR and The Voice battle for top ratings crown 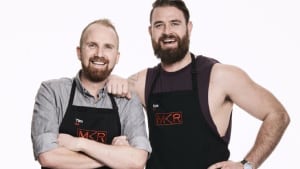 Tim and Kyle found themselves under the pressure of pretzels

Seven and Nine's flagship programs are battling it out in TV ratings with My Kitchen Rules winning Wednesday night.

My Kitchen Rules semi-final raked in an audience of more than 1.2 million viewers as Tim and Kyle crumbled under pretzel pressure in the dessert round.

Nine's The Voice, which is only three episodes into its new season, had just over 1 million viewers. The Voice did pip MKR to the post on Sunday, bringing in 200,000 more viewers.

The debut of Seven's lifestyle show Aussie Property Flippers, which aired after MKR, pulled in 548,000 metropolitan viewers. The show gets couples to buy, renovate and sell properties to see who can earn a quick buck - similar in concept to a condensed version of Nine's The Block.

Nine and Seven are neck and neck with daily share, pulling in 23.6% and 22.7% respectively. Channel Ten continues to fall behind the ABC, with an 8.8% share. Its next tent pole show, MasterChef, begins next Monday.

This year, Coles will continue its sponsorship of MasterChef, with Harvey Norman, Devondale, Mondelez International, Cobram Estate and Ikea also partnering with the cooking show.