Qantas swings to The Monkeys for new 'Feels Like Home' ads 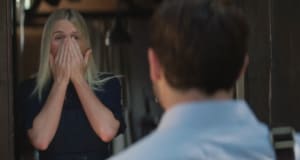 Qantas has launched its third iteration of the 2014 'Feels Like Home' campaign, this time created by The Monkeys.

In the latest instalment the campaign includes two spots which centre on families from the UK and Australia reuniting.

It is timed to promote the new direct 17-hour route between Perth and London which takes first flight March 2018. Both of the two-minute spots are filmed on location in WA and the UK.

The original 2014 campaign was developed by the late Neil Lawrence, who passed away nine months after it launched.

Qantas executive for brand, marketing and corporate affairs Olivia Wirth says the latest ads capture the memories and emotions of the 'Kangaroo Route'.

“We think it does a beautiful job of exploring the significance of linking Australians directly to the UK for the first time, focusing on real people and experiences,” says Wirth.

“Qantas invests heavily in promoting Australia as a tourist destination and the campaign, which is also running in the UK, shows some of the fantastic places travellers can visit in Western Australia in a single hop.”

The first spot features a family heading over to the UK to see their grandmother and the second sees a long distance couple reconnecting.

Like the previous chapters of the campaign, this one uses Martha Marlow's rendition of 'Feels Like Home', which replaced 'I still call Australia home' in 2014.

The campaign was developed by The Monkeys, which has been on Qantas' creative roster since late 2015. This is the first time the shop has worked on the 'Feels Like Home' campaign.

The Monkeys co-founder and CCO Justin Drape says the agency aimed to capture the poignancy of the original series.

“The late Neil Lawrence, Mark Molloy and the Qantas team started this campaign with beautiful emotional stories that have resonated with all Australians who travel,” Drape says.

“With the Charlton family and Imogen’s and Michael’s story, we wanted to continue this type of storytelling while also showing what it means to be able to fly directly between Australia and London.”

The ads will roll out on TV, outdoor, in airport terminals and on digital and social channels from Sunday (30 April).

Check out the new spots here: