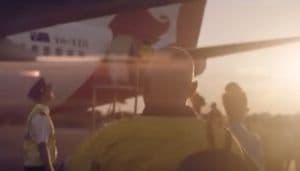 Qantas has unveiled the fifth instalment of its "Feels Like Home" brand campaign, which features the story of a fly-in-fly-out (FIFO) miner who is traveling home from Western Australia to Adelaide.

The latest version of this campaign will go to air this Sunday and shows Matt from Adelaide who works long shifts at an iron ore mine in the Pilbara, WA. The spot shows Matt flying to work at the mine, his time on shift and then flying back home to be welcomed by his young family at the airport.

During this campaign Qantas has also featured the stories of Charlotte,holidaying with her grandparents in Los Angeles, and Melinda, travelling from Hong Kong to Australia to introduce her new baby to his proud grandmother back home in OZ.

Since the launch of the "Feels Like Home" campaign in November, the two-minute TV ad featuring the montage of all five reunion stories has achieved 2.3 million views across Qantas's digital channels and altogether, the spots released so far have amassed seven million views.

Also as part of the campaign, Qantas partnered with music streaming platform Spotify to offer people the opportunity to share the songs that make them feel like home.

As part of the campaign 1.9 million impressions were served which reached more than 800,000 people. Of those people reached, 10,000 have been driven through to the app to engage, with 36% going through to add their song. This far exceeds Spotify’s industry benchmark average of 9%.

These spots were created by Kevin 07 adman Neil Lawrence, who was tasked with creating a spot that repositions the business following a major organisational restructure as Qantas aimed to re-engage with the emotion people feel for the brand.

See the spot for yourself below: