Ninja pulls 2.5m for Sunday - its biggest audience to date 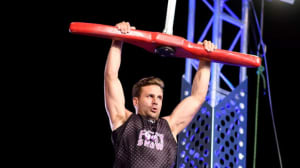 Nine's Australian Ninja Warrior continues to leave all other shows in its wake, with last night's episode pulling in 1.75 million average metro viewers and a national audience of 2.52 million. It peaked nationally at 3.08 million.

The show has dominated ratings since its launch last Sunday, and doesn't seem to be slowing down any time soon. It's also providing Nine with a halo effect. 60 Minutes, which follows Ninja, had a massive audience of 1.06 million metro viewers, more than 200,000 ahead of Seven's Sunday Night.

It's dominating all key demographics, and what will please Nine executives is that it's comfortably winning all of capital city markets for its prime time spot.

Ninja premiered last Sunday to a national audience of 2.33 million viewers, with the Monday episode raking in 2.27 million nationally, making the first two nights of the Ninja the top two entertainment programs this year, excluding sport.

Check out what Nine's programming chief Adrian Swift thinks is the secret to Ninja's success.

Last night's episode drew some criticism on social media after deaf contestant Paul Cashion failed to realise he was disqualified on the first obstacle for touching the water.

Seven was originally scheduled to debut its Big Little Shots program last night, however, the show was moved ahead of the Sunday premier in response to Ninja's success.

Instead, Seven launched its new crime show, Secrets of Scotland Yard, to an average metro audience of 414,000.

Nine News was the second most watched show for Sunday, with an average metro audience of 1.21 million.

Instead, Seven also ran Sunday Night at 7pm, which posted relatively impressive metro ratings of 821,000 against Ninja, and Border Security at 8pm, which had 624,000 viewers in capitals.

Seven's coverage of Roger Federer's Wimbledon win posted average metro ratings 464,000, although this was spread over many hours and would have been higher for the men's decider.

MasterChef, which ranked sixth in the top 20, posted an average metro audience of 806,000, which was behind Seven's Sunday Night for the first half hour, and well behind Nine's Ninja throughout. Although a stronger performance than last Sunday, MasterChef would have hoped for higher ratings leading into finals week.

Ninja's continued success has lead to Nine knocking Seven off the top spot for daily share for the second week, as Nine had 30.5% of the audience while Seven trailed behind with 18.8%. Ten had 12.2% of audience share.

Nine's broadcast of the State of Origin third match was the most watched prime time show of the ratings week, with a city metro audience of 2.49 million.

Nine had strong start to the week with the premier of Ninja, and then continued to dominate with Wednesday's Origin decider. The network's audience dropped off on Thursday, with Seven taking the lead from Thursday to Saturday.

Nine pulled in the highest audience for the week in terms of channel share, with a whopping 43.3% of the share, followed by Seven with a 35.6% and Ten with 21.2% of audience.