Media agencies will kill themselves first, the consultancies won't do it 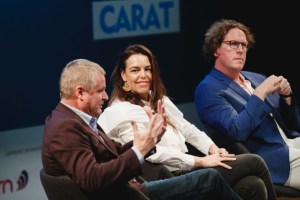 Speaking on the “'Consultancies: Corporate clones, or industry darlings?' panel alongside RXP CEO and executive director Ross Fielding and KPMG Customer, brand and marketing advisory partner Carmen Bekker, Phillips says there's not as much overlap with media agencies and consultancies as some suggest.

Phillips, who was part of the McCann Melbourne senior leadership trio that was poached by Deloitte Digital to build out its brand and creative offering, also confirmed the firm wasn't wasn't looking to get its hooks into media buying any time soon.

He said potentially on the communications side of things they may overlap with media agencies, but certainly not on some of the core media offerings.

“I don't think we're looking to get into what media agencies do,” he said.

“Certainly, yes we review the performance of media agencies, but I don't think do the same type of work.”

Phillips questioned how well positioned media agencies were to be properly advising clients on things like ad tech stacks due to possible bias. The panel agreed consultancies are better positioned with “unbiased advisory” being particularly in vogue after transparency issues within the supply chain.

On the subject of bias, following the collapse of government contractor Carillion in the UK, a parliamentary report this week suggested intervention is actually needed within the four firms that dominate the sector — KPMG, Deloitte, EY and PwC - and is calling for the big four to spin off the audit part of the business from the consulting part of the businesses.

A report in the Financial Times said the big four operated as a “cosy club incapable of providing the degree of independent challenge needed”.

It's unclear at this early stage how this could impact other markets in which the big four operate in.

Also on the panel, in response to an audience question about what agencies could learn from consultancies, Phillips said agencies need to stop looking at consultancies and think about themselves.

“I can sit here and talk for an hour about the stuff that I've learned in the last six months, that I wish I knew when I was working agency side. It's been incredibly enlightening,” Phillips said.

“We were almost asleep at the wheel while that was happening, it should have happened.”

Phillips suggested that while media is in more of a trifle than creative agencies, many creative businesses aren't always putting their clients' best interest at heart.

He said they're pursuing creativity, often without actually understanding how that can benefit clients and they still have that transformation to go through.

“So many creative practices just haven't transformed to be digitally led practices yet,” he said. I mean, they're the threats. That stuff should have happened a long time ago for the industry.”

Agencies must invest more in their own brand

Bekker said one of the things she has noticed in the agency world is that agencies don't invest much in their own brand.

“We're seeing with our clients, that the 'brand' is one of the key differentiators in purchase for their customers, but also for us,” she said.

“So, that's an interesting territory that I think agencies can think about, what their own brand stands for and then develop behind that. We don't see much marketing from agencies themselves.”

Bekker, who was previously managing partner and European marketing director at J. Walter Thompson London, also says KMPG does not feel a lot of competition from any agencies.

“I think starting consultancies, such as the one WPP has just started one, I think it's a good idea. There are some very smart people in agency world and they should be celebrated and the real thinkers should try and get room at the table to have those strategic conversations with clients,” she said.

She said in consultancy, the first conversation is with the board or the CEO or the CFO.

“It's the C-suite conversation we have. And in the world I was in, in creative agency, it was very hard to go beyond the CMO unless you were with the CMO presenting to the board - you were already below a decision level,” she said.

“So, I think if agencies can push up further into the C-suite, then they might find some success in the consultancy area.”

Fielding, whose 800+ strong business purchased creative agency The Works last year, said both agencies and consultancies can learn a lot from each other, as it has been doing with his new acquisition.

“That's the way we see it, that both can learn and that's what is really interesting,” he said.

“There's a lot that creative agencies can pick up from consultancies and the other way around. In fact, we'll stop using the word 'consultancies'. We're not a consultancy, we're just RXP.”

The past 12 months the industry has seen something of a domino effect when it came to independent agencies being bought by consultancy groups or companies outside of the traditional holding group model. First came The Monkeys and Accenture Interactive. Next up was The Works selling to technology company RXP for $33 million in August 2017.

What piques most interest in agency acquisitions is the way the two organisations talk about the seamless merging of two disparate cultures. There’s often a great deal of scepticism about the reality.

In AdNews in-print we met the new combined team of The Works and RXP. Check it out here.

Did you miss the AdNews Media + Marketing Summit Sydney? Check out more content below and get tickets to the Melbourne Summit here.

Cricket Australia on shifting perceptions from a ‘gentleman’s game’