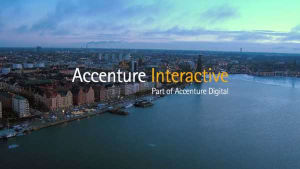 The Monkeys and Accenture Interactive are confident their deal will forge the future of advertising by founding a new model that sees consultancy, creative and technology merge.

The Monkeys also believe a consultancy tie-up will revolutionise how agencies work with clients, introducing remuneration models that better reflect a modern adland.

“We don't want to go in with a cookie cutter approach,” says Patricio De Matteis, Accenture Interactive MD for APAC.

The Monkeys chief creative officer Scott Nowell says in a lot of ways, the deal is simply "joining the dots" of a number of capabilities.

"That's what so exciting from a creative viewpoint, you’re talking about the type of creative thinking we've put in place over the last 10 years on a much broader scale - that's exciting for everybody.”

“This is a new model - that's actually what we're talking about. The best of each creates a new model. Part creative, part technology and part consultancy coming together - that in itself to any CMO is a massive differentiator. They do buy in silos but us being able to forge customer experience from end-to-end is the play here. We're bringing to market a brand new model as of today,” Buckley says.

Don’t expect to see The Monkeys deviate from the big brand work that has seen the agency take out a number of accolades over the years.

The Monkeys haven't been shy of suitors over the last decade, but opted against joining a holding group that wouldn’t stretch beyond what the agency could offer.

“One thing we’ve heard a lot from CMOs is about the lack of cohesion - created or bought in silos and this now offers a cohesive output. That’s the thing we’re most excited about. We're offering a big complementary service route, not just more of the same,” The Monkeys chief creative officer Justin Drape explains.

The merger will move the agency away from a traditional agency retainer model towards performance-based remuneration.

“What excited us was to maintain the ownership at a brand level [of clients] from strategy all the way to execution and flawlessly deliver that in a seamless way. When you pair [The Monkeys] with Fjord and our ability to redefine products and services, and our capability from a content and commerce perspective, in a value-based equation your suddenly changing the way we tackle client needs,” De Matteis says.

Nowell says it's about reimagining the future of the industry, and the team are adamant it won't compromise the agency's culture.

"We’ve always prided ourselves on being able to change the way the industry operates and what an ‘advertising’ agency can do. This definitely signals that change in the right direction, and changes a lot of things that are currently holding the industry back. We want to be out there in front - even though it’s lonely sometimes," he says.

Drape, Nowell and CEO Mark Green have all received numerous expressions of interest for new roles since the announcement, something that is likely to accelerate as it looks to staff up a new Melbourne office and entrance into the APAC market in the next six months.

“We always talk about 'well done is better than well said', and that’s what we’re aiming to show now,” Green says.

Neither The Monkeys nor Accenture Interactive would reveal the terms of the deal, except to say it’s a 100% acquisition.

The deal echoes Accenture’s acquisition of Karmarama in the UK earlier this year. Notably, Jon Wilkins, chairman of Karmarama (and the original co founder of Naked) worked in Sydney for two years at Naked between 2009 and 2011 and would have known The Monkeys team. It’s likely that Wilkins could have been a conduit in the conversation between Accenture and The Monkeys.

Across the market, response to the deal has been mixed. Many see it as a smart move for The Monkeys, and a better play than selling the agency to one of the other networks. It’s also suggested that it’s likely to have been a better deal than if the agency had sold to a network. The Karmarama deal was viewed as a generous offer, AdNews understands.

TBWA CEO Paul Bradbury said it’s a “good strategic move” for the Monkeys and broadens their capability in customer experience.

Adam Ferrier, a long-time friend of Mark Green, echoes that sentiment. “Good on them. The Monkeys is a fantastic agency, it’s good for the market and the industry as a whole,” he says.