Cricket Australia on shifting perceptions from a ‘gentleman’s game’ 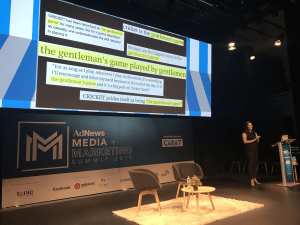 Cricket Australia has a big task at hand in shifting perceptions from a “gentleman’s game” towards a game that supports equality, admitted head of female engagement Sarah Styles.

Speaking at the AdNews Media + Marketing Summit held in Sydney today, Styles said Cricket Australia has made significant changes to the organisation, both internally and externally, to get women more involved with the sport.

Major progress has already being made, most notably the transformation and professionalisation of women’s elite cricket, rapid increases in the number of women and girls playing cricket, and the KFC Big Bash League’s gender-balanced crowds, but Styles knows there is more work to be done.

“We were perceived as a men’s sport that was played by men, watched by men and attending by men. But that wasn’t the case but, as many of you know, perception is reality. The reality was something else altogether,” Styles said.

Styles revealed the internal overhaul Cricket Australia has had to undergo to match the language it used, to its mission statement of creating an equal sporting game. As a result, it scrapped “women’s cricket”, instead calling it just cricket.

She described the rise of women’s sport as the “most visible example of the rise and empowerment of women and girls in Australia”, addressing the wider shift towards women being included in sport.

Cricket Australia may be investing in a greater focus on women’s involvement, but it won’t come at the expense of the men’s game, Styles explained.

“It’s not about recutting the pie and taking anything away from the men’s game. It’s about growing the pie,” she said.

She also admitted that Cricket Australia has a lot of work to do to build back trust around the men’s game, following the ball tampering scandal earlier this year.

Styles views female engagement as the single biggest opportunity for Cricket Australia, but admitted the area is still a “work in progress”.

“There is so much more room to grow. Media coverage and commercial support is still only a fraction of what it could be,” she said.

She finished her keynote speech by warning other organisations of the dangers of not making diversity a priority.

Keep an eye on #AdNewsMMS for more from today's event. Get your tickets to the Melbourne Media+Marketing Summit here.