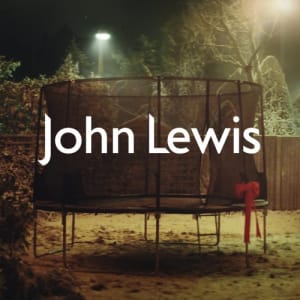 In what can only be described as the most eagerly anticipated and much-talked about Christmas advertising campaign of the year, British department John Lewis is back with its latest festive spot.

The TV ad is set to the magical cover of Randy Crawford’s 1980 jazz hit One Day I’ll Fly Away by London electronic group Vaults and tells the story of Buster the Boxer, enviously watching the neighbourhood's wildlife leap around on the family's new trampoline on Christmas Eve.

While animals take centre stage in the commercial, the spot also stars a six-year-old girl who is beaten to her trampoline by Buster.

The retailer has been dropping clues about the ad for the past week, even inspiring a fake ad that went viral.

John Lewis revealed the ad on Twitter, which already has more than 10,000 shares and is expected to climb.

The 2016 ad is a departure from emotion-laden tearjerkers of recent years, including John Lewis' 2015 Man on the Moon campaign with the Aurora version of Oasis' Half the World Away song; 2014's Monty the Penguin featuring Tom Odell's version of the John Lennon song Real Love and 2013's Bear, and The Hare ad with Lily Allen singing Keane song Somwhere Only We Know.

All three adverts were created by Adam & Eve DDB, which is owned by DDB Worldwide.

John Lewis launched its first Christmas advert in 2007 and it has since become an annual tradition and a big signal that the countdown to Christmas has begun in the UK. Of the seven ads it has released, two soundtracks made it to number one in the music charts, with another two in the top 10.

See below for Man on the Moon ad:

See below for Bear and The Hare ad

See below for Monty the Penguin ad

UK supermarket Sainsbury's adverts have also become a popular ad to watch out for. Last year it turned to a family pet created by popular children's author Judith Kerr in its Christmas ad spot which looks to evoke the giving spirit.

In 2014 Sainsbury's 2014 Christmas TV ad was deemed emotional and controversial as it retold the Christmas truce between Germany and England in WWI. The ad, by AMV BBDO, was inspired by real events from WWI. Sainsbury's also created the chocolate bar in the advert and will donate the proceeds to The Royal British Legion.

Fancy a peek at some Australian 2016 Christmas ads?

Check out:
David Jones and Cate Blanchett ask 'How do you Christmas'
Westfield unveils Christmas campaign – with the 'Nanna Squad'
Telstra celebrates the magic of Christmas, unveils festive campaign