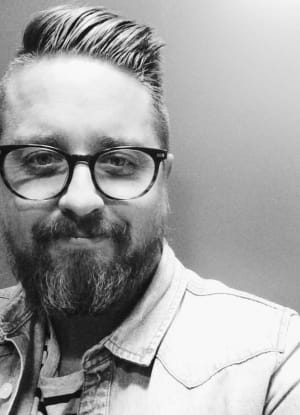 This week we head to Sydney to meet Peter Brennan, director of innovation at media agency Atomic 212°.

Location you are based:

I’ve been with the group since April 2013 when I first moved to Sydney from London.

I started my career at a trend forecasting agency called International Trend Institute working predominantly on the Mr Price fashion retail account under the talented Neville Trickett. I then looked after marketing and art direction at the youth brand Quiksilver, before relocating to London where I spent six years working hand in hand with some of the UK’s most successful ATL and BTL creative agencies.

Besides my role at Atomic 212°, I also run a tech startup called The Pratley Co. We’re about to launch an app called ViewPop that lets users capture 3D content from their smartphones.

In one sentence, how would you describe what Atomic 212° does?

It’s unbelievably hard to get a clear message through to consumers these days, which is why I’m entirely focused on amplifying creative media ideas.

First, evolving from a Search Engine Marketing business to an all media performance marketing agency. The second milestone has to be the run of client wins we’ve achieved, with the likes of Nike, AMP, TAB, NAB, Dick Smith, NIB, Origin and many others. The breadth and variation of our client base has triggered the investigation and development of solutions that connect brands with performance media.

What's the best thing about the industry you work in?

Anyone who works in the media/creative space has the opportunity to come up with game-changing ideas that alter the landscape of the industry. I feel that certain brands in Australia lack creativity, and there’s a massive opportunity for us agency folk to fix that. Being experts in this field allows you to position your client’s brand in a new and innovative light. Waking up with the opportunity to do that every day is exciting.

Challenging Dooris to the agency and replacing him as CEO of Atomic 212° (nervous laugh).

I’m a neat freak that suffers from severe OCD. All labels have to be facing the front, and objects on my desk have to be at right angles. Always.

Hustle. There’s a video online by a marketing guru named Gary Vaynerchuck called ‘The Most Important Word Ever’. Everyone should watch it at least once a day.

The Sony “Balls” advert from 2005 by Fallon. It was directed by Juan Cabral who was just 27 years old at the time. I remember being completely mesmerized when I first saw it. Fallon had to source a million rubber balls for the ad and the entire thing was shot in one take by a 23 man camera crew and no CGI. The soundtrack was also the first time I was exposed to the wonder that is José González.

I’m an Apple whore. My iPhone, iPad and MacBook Pro follow me everywhere.

Social. Although some brands do it well, I think a number of businesses still don’t realise the power of social media. When integrated with traditional media in the right way, you can really get your story across in a tone that wins customers much quicker than we’ve ever seen before.
A good example of this is ‘Dollar Shave Club’ – they create relevant content that they share across their channels in an interesting and entertaining way.
Social media completely exposes brands as they have nowhere to hide, which encourages honesty and transparency, and is something consumers appreciate.

True Detective. I’m a massive Raoul Marks fan. His intro animation alone had me hooked from the start. And McConaughey played out of his boots from scene one.

Zero to One by Peter Thiel

I was the kid that loved coloring-in books. It was a natural progression to figure out how to do that on a computer screen. Once the physical practice of design is understood, the strategy and theory around why and how it works is the next step in learning how to market a brand.

A Barista. Coffee is a vice of mine and I believe there’s a true art to making a good cup of coffee. There is no excuse for bad coffee.

Selling Atomic 212° back to Dooris.

Butter. Full-fat salted butter. On fresh bread. There’s a fat man inside of me trying to get out.

Did you catch the last couple of profiles?

Want to take part in our Industry Profile? or have some one to nominate? Email pippachambers@yaffa.com.au