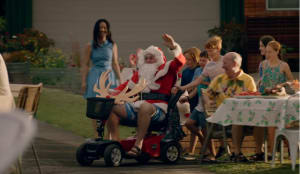 Woolworths has delved into Australia’s street party culture for its Christmas campaign.

The 30-second TV commercial heroes a five year old narrator called Holly, who is super excited about the silly season.

It shows Holly and her friends enjoying raspberries, pavlova and checking out the houses decorations.

The campaign, by M&C Saatchi, is a continuation of the ‘That’s why I pick Woolies’ tagline launched earlier this year, exploring the role that the retailer plays during Christmas.

Tom McFarlane, creative partner, M&C Saatchi says: “The power of a genuine brand platform is that you can stretch it. We didn’t need to start again for the festive season. Instead we built on our positioning line, ‘That’s why I pick Woolies’, by simply adding two words – ‘That’s why I pick Woolies for Christmas’. And little Holly is the perfect character to remind us of the magic Christmas brings.”

This year's Christmas campaign takes a different approach to its 2015 ad by Leo Burnett, which featured Jamie Oliver alongside real families.

Woolworths director of marketing Andrew Hicks adds: “Australians love Christmas and ‘Street Party’ celebrates the joy and fun of the season, and the rituals our customers take part in. This is a time of year when we celebrate together and we hope the campaign will provide further inspiration for Aussies to create delicious festive dishes that play an integral part in bringing families together.”

Woolies ambassador Jamie Oliver also makes a return in a second piece of content, where he gives tips on what to make from Christmas dinner leftovers. Oliver says in the 30-second spot that the recipes are part of the retailer's commitment to its customers and reducing waste.