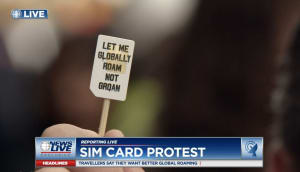 Vodafone is kicking off a multimillion dollar brand relaunch campaign to promote its new simpler tariffs, reposition the brand and break free of the complexity that the telco industry has bred into the market.

The campaign, set to launch today (Sunday 23 August) introduces the #BigLittleProtest concept and sees Vodafone hold a protest against common customer frustrations around telco tariffs and data use.

It addresses common customer gripes but instead of giant placards, protesters hold up tiny SIM cards with slogans including “Let me globally roam not groan”.

The campaign follows the introduction of new plans and functions including tariffs designed to simplify what customers pay for international calls and adds free local calls and texts as standard. It also comes as Vodafone says it is finally growing its customer numbers after several years of back sliding as customers switched to Telstra and Optus.

Vodafone CMO Loo Fun Chee who joined the network in January from Phillipines telco Globe Telecom to replace Kim Clarke, says the campaign is about getting ‘cut through’ in a market that has been built around complexity and confusion for consumers. It was compounded by Telstra’s monopolistic and “extreme” dominance in the market, she said, that meant for years there was no need for any innovation because it could “dictate pricing”, which lead to tariffs and industry standards they weren’t in the customer’s best interest.

“But I came from an emerging market and it’s incredible the speed in which we were providing value for the customer and every player was innovating. There is inertia in Australian consumers, even if they’re unhappy with their operator, they won’t switch just based on price, so we need to change the conversation and talk about what you’re buying into with Vodafone. It’s not about price; it’s about committing that we will give you a simple plan,” she said.

“The question is about how to make customers listen, we’ve got to get cut through… the way that we’ve approached it is to say ‘how do we bring awareness that customers shouldn’t be living in this kind of environment [of complex tariffs, restricted data use]’?

“Coming from another market it’s strange to see that we still have things like peak and off-peak but that’s what the industry has been giving people all this time. What we’ve done is say that it’s time for Australians to really stand up to all of this. We’ve been part of that but we’re now listening and taking steps to stand up for customers.”

The campaign was created by Cummins&Partners which was appointed to handle the creative account in November and launched its Sydney shop to service the account.

It was filmed over two days in Brisbane with much of the script ad-libbed and based on what genuine customers have told Vodafone about what frustrates them about mobile tariffs.

As well as the main protest, the ad also includes cutaways to different characters such as a businessman, bohemians, documentary makers, who espouse their reasons for protesting, as well as featuring the Australian police, who back the peaceful protest

“Earth hour was invented by Australians. The Australian idea of a protest is to sit in the dark for an hour, so the Big Little Protest is protesting the Australian way. Unlike most angry, confrontational protests, the Australian tone and manner is about equality and having a fair go. The tone is more relaxed and tongue in cheek. That’s the creative approach,” explained Chee.

Chee told AdNews ahead of the campaign launch that Vodafone wanted to take a step back and address what its global ‘Power to you’ slogan really meant to an Australian audience and try to break free of the typical product based ads that look the same from every network with something that differentiates.

Big Little Protest is the first brand positioning campaign since the controversial Kidults brand campaign that launched two years ago to encourage people to rethink Vodafone, but was eventually dropped after becoming one of the most complained about ads last year. She told AdNews earlier this year that first she would focus on product marketing, and follow with branding.

Speaking about Kidults, Chee said: “We didn’t start off to be controversial with that ad, but I think we spent a lot of time this time thinking about what Power To You means to different groups. We really need a cut through and we wanted to go back to ‘Who are the Australian consumers? What is the tonality that resonates with them?’ We wanted to say that the industry is doing things this way – we need to find another way.”

Chee said that the brand and agency didn’t approach the campaign as a TV-led campaign, but from a content perspective adding that there are reams of footage that will be used to create additional online and digital content for social channels.

The ad will run across TV, radio, social, digital, online and outdoor and Vodafone says it is “experimenting” with its media mix. It is investing in content to target multicultural audiences with bespoke content to target Chinese and Indian communities in Australia using channels such as WeChat.

For more on Multicultural Marketing, read the Special Report in the latest issue of AdNews in Print (21 August). Subscribe to the mag in print or get it now on iPad.

It has also created a hub on YouTube that will house content, and sequential content will run across NineMSN, YouTube and social channels, and it’s is pushing further with regional TV into Northern Queensland and NSW.