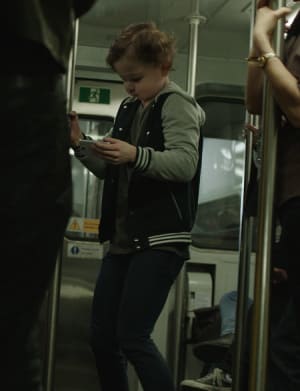 Vodafone’s efforts to convince consumers to reappraise its brand and come back to the network have culminated in a brand campaign that introduces ‘kidults’. That is grown ups with superimposed babies heads. The brand says it is a metaphor: embrace your inner child.

Devendrah Banhart’s quirky track ‘I feel just like a child’ accompanies the CGI ads where kidults play football in the street, ride luggage trolleys at the airport, and play games on a mobile phone. All with childlike wonder.

Vodafone general manager of brand and communication Jana Kotatko told AdNews at an exclusive preview of the ad last week that the aim is to lift the brand out of the category’s typically price and offer-based messaging. It aims to demonstrate that Vodafone is a new business, and very different to a few years ago.

“This is unashamedly a win back strategy," she said. "We want our customers back from Telstra.”

To put its money where its mouth is Vodafone has invested much more in the campaign than it would normally and has a longer-term view on the ROI.

“We’ve invested more in this than we would in previous campaigns, [because] we’re relaunching this brand and we intend to stick to this creative platform for a long time because it's distinctive and fabulous," she said.

"It’s such a big idea and has creative richness – it’s got endurance. Given that, the money we’ve invested now, we know the money will pay back. Instead of how we would usually plan on a quarter-by-quarter budget, we’ve taken a much longer view of this - it’s an upfront investment but over time it will pay back.”

Vodafone started to lose a lot of customers about two years ago. Most phone contracts last two years. That the campaign happens to coincide with the period when ex-customers' contracts will be coming to an end is “serendipitous”, said Kotatko.

Vodafone is also preparing experiential activity in the coming weeks in a bid to walk the walk as well as talk the talk.

“We’ll also get good content [from the experiential activity], but importantly we get to show that it’s not just claims – it’s backed up.”

It is the first ad to use Vodafone's new global identity that Kotatko said gives the brand more creative freedom than the previous corporate branding.

Vodafone’s brand overhaul follows revamps from both Virgin and Optus in the last six months and Telstra's overhaul two years ago, something Kotatko said has “lifted the whole category”.

What differentiates Vodafone’s brand campaign from its rivals’ is the business strategy behind it, she claimed.

“It’s not just a campaign. It’s an all business transformation. We have a new network, new propositions, disruptive propositions - these are massively transformational things. We’ve rebuilt our business and the rebrand is the last thing we’ve done. It’s based on incredibly strong foundations and that’s worthy of disruptive creative like this. That’s what sets us apart from the other guys. This isn’t a lick of paint - it punctuates publicly an all-business turnaround.”

The ‘Kidult’ campaign was created by Ogilvy with a strong STW contingent in tow.

Ogilvy's national executive creative director, Steve Back, argued the creative was designed to bring the brand back to its root, rather than compete on price or features.

“It's an opportunity to lift it out of a pricing war and back to where it was. The brand used to make these grand [albeit] believable statements about your personality and what the brand did for you,” he said.

“The timing is right [to change that]. I don't think it's going to solve all the problems under the sun, but people will reappraise the brand which I think is the exercise. It's important Vodafone starts talking with a bit of confidence and I think this does that.”

Back added: “The encouraging thing from a creative perspective is we've done things right, there's not being a lot of compromise.”

Other STW agencies involved in the 'Kidult' campaign were Ikon Communications for media buying, Bohemia for media strategy, DTDigital Sydney for digital and OgilvyOne for customer relations strategy.