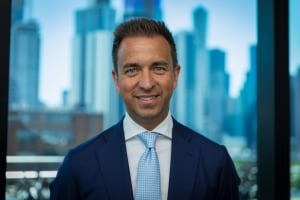 He is bullish in his claim that DAN has been the first to change, having transformed "faster than anyone else" by creating a new holding group and agency model that centralises capabilities.

This has included the launch of Amplifi, a centralised investment arm, the introduction of people-based marketing platform, M1, a new government services division and its direct clients services division InvestDirect@DAN.

He also believes Dentsu's bespoke client model and diversified services are at the forefront.

"The agency model has to change and in respect of our agency group, by us centralising capabilities, diversifying services and making our media agencies more client facing - you're seeing that changing model," Ryan says.

"We're at the forefront of change from an industry perspective and by the same token, a number of competitors are way behind.

"Those who aren't evolving or those who aren't going through levels of organisational transformation will fail in the next two years. There will be fewer agencies moving forward than more."

DAN underwent plenty of organisational change in 2018, including investment in Amplifi, leadership shuffles and the acquisition of agency and marketing businesses such as sports firm Klip Desk and cloud agency Amicus Digital, which he calls 'diversified services'.

He believes this has put his agencies "ahead of the curve" when compared to the competition - a bold claim which he acknowledges will be controversial within the industry.

He labelled the industry chatter and criticism of the changes at Dentsu as a "lack of understanding" when it comes to DAN's evolving business model, including the decision to create Amplifi and the launch of InvestDirect@DAN.

"We've done the right things and have streamlined our business. We're focused on efficiency for ourselves and on capability for our clients and by doing that, we're setting our business up for better success in the future " Ryan says.

"The industry is going through transformational change globally and we've taken the hard steps this year to transform our business through leadership, acquisitions and new services.

"To do all that, you've got to have a very strong understanding as to where the market is going and what the core needs of clients are."

As part of the transformation at DAN, several high profile leadership changes have taken place across all three media agencies within the group.

Over the last two and a half years Ryan and the DAN team have created a new leadership structure within each agency that effectively removes the CEO role to create better efficiencies across the entire group.

"By having three managing directors across our businesses who have very different approaches and strategies, but are equally motivated by the consultancy model that they will bring to their clients, it's a greater representation of the overall operating model we are creating," Ryan says.

"We went into this year knowing there was some change that needed to be created and knew there would be some change pushed upon us too, but it's given us the opportunity to address areas of the business that needed a refresh and adjustment.

"The people we put into those positions now have a very solid understanding of what they need to do and a very clear understanding of the consultancy type approach that we need to provide to clients - in what is a very demanding high-risk market at the moment economically."

Ryan says the business will also continue to focus its efforts on furthering staff retention strategies throughout the entire business.

"To be quite frank, we have less churn than our competitors by way of staff retention," he says.

"We've got a good staff retention ratio but at the same time, we've got to deliver for our clients and that's our main focus. We need people that are focused on client delivery above all else and if they can manage that, then they'll have a great career."

Confident in the group's performance in 2019, Ryan says the centralised capabilities, alongside the new leadership team and agency structures will allow the 'media' side of its business to bounce back from what he acknowledges as a "slow" year.

With the loss of significant global and local accounts, including Mondelez, one of Carat's biggest clients, and The Federal Government master media account, held by DentsuX until this year, Ryan says DAN is aware there is work to be done next year, particularly around new business.

"It's sad to see it go but that's what global decisions do. Sometimes someone gets a cold and you get one too, even if you're not sick. We've got to remember that and you know what? That swings both ways.

"The Federal account was also really unfortunate but clients make decisions sometimes that you can't control and sometimes you don't do a lot wrong, you just need to be able to cop the punches sometimes."

The core media business may have taken a blow in 2018, but Ryan boasts the credentials of its 'diversified services'.

"The point I make about our business is - half of it is media and half of it is what we would classify as diversified services," he says.

"The diversified services side of our business has had an extremely good year in new business and the media agency side for us has had a slow new business year. However, looking at the pipeline and the way that we've addressed the re-organisation, I'm very confident that we would be outstripping our competitors moving forward."

While some in the market have criticised the decision to split out Amplifi, Ryan says the centralised arm is "progressing well" for DAN and argues that naysayers fail to see the bigger strategy.

He says by having investment specialists housed in a "tight-knit" agency structure, Amplifi has allowed the larger agencies in the group to focus their attention on solving more pressing client solutions.

"A year on from the change it's going well. Frankly, the results that we're getting through to audits are unbelievable and we know that we're achieving all at-cost KPIs for clients which I think is a stand-out point," he says.

More from Ryan next week.