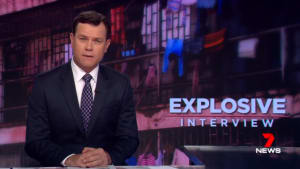 Nine's The Voice pulled in an average metro audience of 1.06 million last night (Sunday), however, MasterChef won all key demos.

House Rules also pulled a solid crowd in all demographics.

60 Minutes pulled in an average metro audience of 956,000 and has come under fire for revealing Sainsbury was previously a sex worker, while Sunday Night drew in 861,000 for running an 'exclusive' interview with Sainsbury's fiancé.

Nine's Last Resort, which had couples in rocky relationships head to a tropical island, is no longer screening on the Sunday night slate since its debut two weeks ago.

Nine brought in the most viewers overall for the night, with its main channel earning 22.5% of audiences. Seven's main channel followed with 21.8%, while Ten had a 13.9% share of the viewers.

The Seven Network topped the prime time channel commercial share for last week, with 38.8% of audience, Nine followed in second place with 34.3%, while Ten picked up 26.9% of viewers.

The top shows of the week were Seven News followed by The Voice and MasterChef.