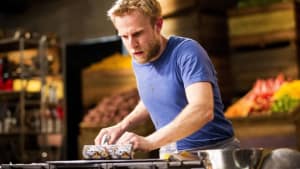 The episode saw the contestants battle it out for the final apron of the MasterChef auditions.

Recreating Anna Polyviou’s cracking chocolate dessert, Nixon is now one of the 24 contestants vying for the winning title.

The British born adman has also spent time working at Carat and Ooh!Media in Sydney, as well as Starcom in London, where he worked for nearly seven years.

Tensions were at boiling point during the final auditions round and it seemed Nixon himself had all but accepted his ousting from the competition.

“This dish could not have been further from what I do, I had never done any of the technical aspects required of this dessert before,” Nixon said during the episode.

In the end talent and clarity prevailed and Nixon was awarded the last MasterChef apron.

Find out how this season of MasterChef is doing in the ratings here.