The changing face of alcohol advertising 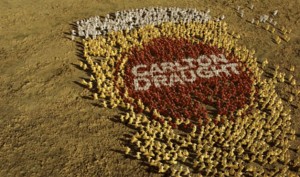 Few images conjure up the iconic Australian lifestyle like friends gathered for a barbeque enjoying a drink or two, but our once-famous obsession with beer and booze is on the wane.

New research shows that consumption of alcohol per capita has tumbled to a 50-year low and ad spend is drying up in TV and print as alcohol brands push dollars into outdoor and digital, AdNews can reveal.

The shift is due to several factors. Firstly, young people (under 30s) are increasingly health conscious, with many preferring to hit the gym instead of the bottle.

Australia's population make up is changing, growing faster in non-drinking cultures in Asia and the Middle East. Government legislation and policy, including lockout laws and heavy taxes on booze, are also having an impact.

Despite this, the dollar value of liquor sales increased by 1.5% in 2015, indicating a shift to premium alcohol products, a report by Enhanced Media Metrics Australia found. Australian drinking preferences are also changing from a nation of beer drinkers (75% of consumption 50 years ago) to beer and wine (41% vs 38% of consumption).

These trends are reflected in recent product launches from big alcohol companies, including Diageo, CUB and Lion, with low-alcohol, low-carb and low sugar products in vogue.

Diageo has invested $20 million in an effort to make premixes “sexy again”. It launched new products for Smirnoff, Gordon’s, Bundaberg Rum and Pimms, with greater investment in above the line advertising.

“What Australians are drinking, where and when is changing. Not only are consumers drinking more moderately, they’re looking for drinks that contain less sugar and less alcohol than premix traditionally does,” Diageo managing director David Smith recently said at the launch of the brand's new products.

Alcohol companies are also changing how they go to market, reflecting changing consumer behaviours, with companies spending more in digital and outdoor as budgets for TV and traditional media are slashed.

Overall ad spend on alcohol beverages dropped 16% from $130.4 million in 2011 to $109.5 million in 2015 - the eighth largest percentage drop of any category over the period, according to SMI figures obtained by AdNews.

Closer analysis of the figures show alcohol brands are pumping more money into outdoor advertising with the medium seeing a 29% increase year-on-year in the first half of 2016.

“Digital disruption has caused changes to most advertising plans over the last few years. Many categories are spending less on traditional mediums,” Outdoor Media Association CEO Charmaine Moldrich points out.

“When it comes to out-of-home, alcohol advertising has remained relatively stable over the last several years because our strengths of ubiquity and high-impact complement digital media channels.”

For Diageo’s Smirnoff brand, which is targeted at younger consumers, a recent campaign for its new natural ingredients premix drink launched without any TV collateral, instead focusing on digital and outdoor. Swedish cider brand Rekorderlig also launched its ready-to-drink cocktail range with a focus on outdoor and digital.

“Australians are being more selective in what they choose to drink and considering more premium options," Rekorderlig marketing manager Nikki Langford told AdNews about the launch of the product.

Not everybody has welcomed alcohol's move towards less traditional media with the South Australian government recently banning out-of-home booze ads on buses, trains and trams.

Fergus Taylor, executive director at Alcohol Beverages, which aims to highlight the positive social, cultural and economic contribution of booze in Australia, says the ban only impacts a very small fraction of the market spend.

“The introduction of lower carb and lower alcohol products are broadening choice for consumers, and as people increasingly seek quality over quantity the industry continues to innovate and premiumise, which is growing value across the sector,” Taylor tells AdNews.

“Any declines in ad spend would more likely just reflect the economy-wide migration to less expensive and more targeted channels like online and social media.”

Beer companies in Australia are facing the biggest hit from falling per capita consumption because of the limited capacity for exports. The category is also being challenged by products such as Bundaberg’s Lazy Bear and Canadian Club, which targeted beer drinks with its 'Over Beer?' campaign.

Globally, the beer industry is going through huge consolidation as Anheuser-Busch Inbev, the world's largest brewer, acquires SABMiller in a US$100 billion buyout.

Locally, beer brands are tapping the mid-strength market, such as Heineken with the launch of its 3 product and CUB, which relaunched its Pure Blonde beverage.

The aim is to reposition beer as the drink for any occasion by providing options that are low in carbs and alcohol strength.

“In this market there is a massive opportunity, the international premium mid-strength segment has grown about 60% in the past year,” Heineken Lion Australia marketing manager Alessandro Manunta told AdNews recently.

Last year, Lion spent more than $10 million over the summer positioning its beers, including Tooheys, XXXX Gold and James Boag, as 99.9% sugar free.

CUB, Lion and Diageo are also investing big in beverages that allow customers to ‘drink better’ with a range of premium products.

Whether products and campaigns targeted towards health concious Aussies will help beer regain its dominance remains to be seen, but how alcohol companies market their wares, target audiences and messaging will evolve to keep pace with changing consumer behaviours and expectations.

Sadly, the days of Carlton's big beer ad might be behind us.

In the next issue of AdNews in print, we ask creative directors and marketers to cast a critical eye over some of the latest ad campaigns from beer brands in our Creative Choice feature. The mag is out in November. You can subscribe here to get it in print, or sign up to a digital subscription here. You can't read the magazine content anywhere online - so don't miss out.