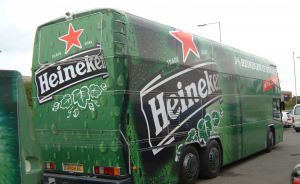 The alcohol and outdoor industries are challenging the latest ruling out of South Australia to ban all advertising of beer, wine and spirits on the sides of buses, trains or trams.

Speaking with AdNews, Outdoor Media Association CEO Charmaine Moldrich says if this ban fully goes ahead, it is a concern to the whole advertising industry.

She believes it is an unfair ruling as it is a proposal to ban advertising for a legal product.

“This ban has been proposed without providing research to demonstrate that it will be of benefit to the community and without consultation with the industries that will be impacted.”

A Diageo spokesperson says the company, which has a brand portfolio of Smirnoff, Baileys and Captain Morgan, is unclear how the ban will impact underage drinking.

“Instead of banning advertising on buses, the SA government should instead look at education and awareness of the risks associated with underage drinking. These are proven measures which have led to a significant decline in underage drinking over the last 15 years," Diageo says.

"We take our role as an alcohol producer and responsible marketer very seriously, adhering to strong regulatory codes, including our own Diageo Marketing Code, to ensure our ads only ever display the responsible consumption of alcohol.”

AdNews ran a poll over the weekend to determine if its readers through alcohol ads belong on public transport - more then 65% of the 100 people who responded answered no.

Fergus Taylor, executive director at Alcohol Beverages, which aims to highlight the positive social, cultural and economic contribution of booze in Australia, says he is concerned the vilification of alcohol ads has begun.

He agrees the latest ruling is detrimental to the advertising industry as the alcohol sector contributes $27 million to out-of-home advertising.

“The health advocacy industry needs a dragon to slay or their money dries up,” Taylor says. “It’s concerning because after alcohol, it will go after sugar and fatty foods. Then it will move from outdoor, to radio to TV.

“The advertising industry needs to get behind the industry associations now – and go with them to talk to governments and the mainstream media to convey the importance of advertising freedom in Australia.”

Last year, the ACT government ruled to stop promoting alcohol on Canberra’s Action buses, along with junk food, gambling and weapons. Fergus and Moldrich expressed concern the ban on outdoor ads seems to be garnering momentum.

“It has to be noted that this ban has not been put in place yet. It has been proposed and in fact there has been no ban in the ACT, just an announcement by a minister of a plan to ban alcohol advertising on buses,” Moldrich says.

“We are hopeful that other states will take a more sensible and holistic approach. We are also hopeful that we can work together with the government in SA to find out what they want to achieve and try to do that without the need to resort to a blanket ban.”

The decision to ban alcohol advertising on bus shelters was led by SA Transport Minister Stephen Mullighan who said it was “impossible to control who views” ads on public transport.

The SA outdoor ruling will affect alcohol advertising on buses, trains and trams, but the industry is concerned it could spread to other mediums like bus stops

However, the official Australian alcohol watchdog is ABAC and the SA government is being criticised for bowing to the the AARB, who “are not an advertising regulator” and have “no transparency”, according to Moldrich.

“What’s concerning about the decision by the SA government is it seems to be based on flimsy information from the Alcohol Review Board, which was created by the anti-alcohol movement. They aren’t supported by the government and they aren't transparent,” Taylor says.

“They try to demonise alcohol as a product and make responsible drinkers ashamed.”

The AARB works with a range of health organisations around Australia including the McCusker Centre for Action on Alcohol and Youth.

The centre's executive officer Julia Stafford acknowledges it doesn't have legal standing to uphold complaints to its board, but tells AdNews this is the challenge with having a self-regulatory system.

“No one has the power – not us, not ABAC. It's a self-regulatory system so no one is able to compel advertisers to take down ads,” she says.

“We know we don't have legal rights but that isn't our end game – we aren't trying to be a regulatory board, we are trying to show that we need one.

“We are now seeing momentum with this movement, so I'm not surprised the industries are worried. The industry has been hiding behind an ineffective system without the proper controls, but now the government recognises it needs to act because self-regulatory isn't good enough.”

Stafford and the AARB is concerned the current alcohol advertising code doesn't have any requirements in regards to ad placement.

'It's purely a content code," Stafford says. "It makes no reference to placement and ABAC has no interest in updating it to make it safer."

Hon Alan Ferguson rejected Staffords claims, saying while the organisation doesn't have control over placement, all advertising goes through a rigorous vetting process that determines if the spot is safe to be seen by all.