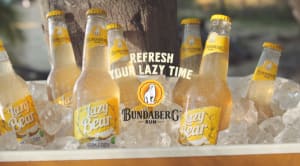 Lazy Bear will launch next week as Bundaberg's low-alcohol offering

Diageo is shifting the focus of its marketing and is preparing to drop $20 million on campaigns to support the launch of four premix drinks.

“We are putting our money where our mouth is. Consumers are changing and it’s creating a big opportunity for RTD grow again. These five new drinks are the first wave of Diageo’s response to the fact the category is going to be growing – not declining," Diageo managing director David Smith said at a presentation held in Sydney today.

He says while Diageo has been disappointed in the decline in the RTD category in the last eight years, he expects the investment in these products will spark big interest.

Diageo’s brand strategy aims to tap into the growing demand for low-alcohol, low-sugar drinks in the increasingly health-conscious Australian market. This is a trend recently leveraged by Heineken in the launch of its mid-strength, low calorie beer, Heineken 3, and CUB which is also pushing into the lower sugar and alcohol categories with new products and marketing.

“What Australians are drinking, where, and when is changing. Not only are consumers drinking more moderately, they’re looking for drinks that contain less sugar and less alcohol than premix traditionally does,” Smith says.

Of the $20 million investment, $10 million will be backing the latest Bundaberg product, Lazy Bear, a 3.5% bottled Bundy and ginger ale mix. The product is designed to “take on beer” Smith tells AdNews. the move echoes whisky brand Canadian Club's 'Over Beer?' ads, which launched in 2008.

Diageo marketing and innovation director Adam Ballesty tells AdNews the product innovations are all insight driven. Diageo head of strategy and innovation Drewe Letchford adds research that revealed men are spending less nights out in night clubs, with the majority of alcohol consumed in more casual occasions, such as picnics and BBQs, is behind Lazy Bear.

“Aussie male socialising is evolving,” he said. “The tempo has changed and it has moved to a more moderate space… As consumers evolve Bundaberg needs to evolve too,” he says.

Lazy Bear is being positioned as a mid-strength, day time drink with 120 calories, aiming to appeal to men who are increasingly concerned with consumption habits and health.

The marketing campaign, ‘Refresh Your Lazy Time’, for the Bundaberg beverage will also bring back the brand's iconic bear, which featured in its advertising for many years but has been absent for almost a decade.

The push will launch on 23 September during the NRL final, as part of Bundy's brand partnership with the league.

There are seven versions of the TV ad, all created by Leo Burnetts, with the bear doing something different in each.

Ballesty says the bear's subtle, but comedic, appearances in the ads are "like an Easter Egg" for Bundy lovers. 'When are you bringing back the bear?' is one of the questions he is most often asked, he joked.

Smith said the company will be doing fewer “small interesting things” as part of its marketing as they get in the way of achieving mass scale and focusing on big budget brand marketing. He cited experiential as one area it will pull back from.Diageo will be cutting back on its experiential offering to focus on bigger executions, such as outdoor and TV.

It's a contrast to Heineken, which said in July it would be investing more in experiential activities,

For years, brands like Bundaberg have been a big part of music festivals, including Splendour in the Grass, and while it’s not likely the brand will move away from those activations, AdNews understands it will cut back the resources and the number of executions.

“We have gone from zero to peak kale in Australia,” Letchford said. “Millennials are the most wholesome generation and they won’t compromise on looking good.”

Smirnoff Pure will be advertised through outdoor and digital, with no TV element being incorporated to the campaign. It's a move away from being associated with nightclubs but something Ballesty says is "unfamiliar, but comfortable" for the brand.

The new premix Primm's products are launching with a campaign featuring MasterChef host Matt Preston for the second year with the same tagline, ‘Welcome Drink’.

Ballesty said research shows the biggest parties are happening in back yards right now and with RTDs set to make a comeback Diageo is making “the biggest play” for this category in the Australian market.