The Bachelor finale wins ratings, but Australia at a loss 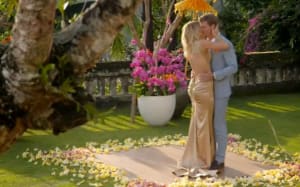 Richie has chosen Alex on the last episode of The Bachelor, but Australia isn't too happy about it...

In what the internet is calling the biggest heist since Guy Sebastian won Australian Idol back in 2003, Alex Nation has taken the rose that matters and Richie Strahan’s heart in the finale of The Bachelor last night.

Twitter erupted with furore when it was clear Alex had won instead of fan favourite Nikki Gogan, with one user demanding Malcom Turnbull start a plebiscite to have the result reversed. So far there has been 26 million views of tweets about the finale, which is expected to increase as the show continues to trend in Australia.

Last night’s episode was up on the 2015 finale episode of The Bachelor, which saw an average of 1.2 million tune in to see Sam Wood falls head over heels for Snezana Markoski. The 2014 finale, in which Blake Garvey proposed to Sam Frost before dumping her before the finale hit TV screens, attacted 1.374m metro viewers.

The episode was down on last year’s finale of The Bachelorette which pulled in 1.50 million metro viewers when Sam Frost picked Sasha Mielczarek.

Network Ten chief programming officer Beverley McGarvey says the Bachelor Australia has cemented its place as "one of the most talked about and successful programs on Australian television".

The biggest spike of tweets during last night's show followed Richie's decision to end things with Nikki. Twitter says it was one of the largest volumes of tweets it's seen as a result of Australian TV this year.

Oddly, Bachelor host Osher Gunsberg is being blamed for the unpopular result as he also hosted the first Australian Idol series that saw Guy Sebastian take the title over Shannon Noll.

While Noll initially enjoyed greater success, particularly in rural areas, Sebastian has since developed into one of Australia's more popular music artists and even represented the country at last year's Eurovision song contest. Noll, on the other hand, now performs at suburban pubs, RSL clubs and country festivals, including the Deniliquin Ute Muster.

One Twitter user, who claims to have an alibi, said Gunsberg is an accessory to the “two biggest robberies in Australian history”.

These are the top three Tweets from last night's episode: