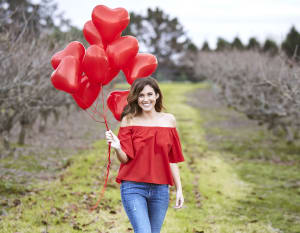 Hot on the heels of The Bachelor finale this week, Ten’s The Bachelorette is hitting the small screen and has secured big brand sponsors for the second season of the spin off show.

Expect to see feasts of fried chicken and pearly white teeth, with KFC and Oral B securing themselves as brand sponsors for the upcoming season, along with Maybelline New York, Chemist Warehouse, Kettle, Häagen-Dazs and Renault.

WIN journalist Georgia Love is the lucky lady set to score a few free feasts of popcorn chicken and maybe even find her soulmate. Love has big shoes to fill with the first bachelorette, Sam Frost, winning the hearts of audiences last year.

Network Ten director of revenue and client partnerships Rod Prosser says: “The Bachelorette Australia was the breakout new hit of 2015, with the final episode attracting 1.56 million capital city viewers. It’s one of the most talked about television events in Australia and a social media phenomenon that dominates conversation whenever it is on air.”

Earlier this year, Prosser told AdNews the sponsors of The Bachelor aimed to immerse themselves in the social activity the show spurs.

Throughout Richie’s search for his wifey, brands including Menulog joined in on the conversation happening on Twitter. If The Bachelorette follows the same format, viewers may see other brands try to capitalise on the show’s social success.

Prosser says viewers can expect to see “unique in-show activations” in the new season of the Bachelorette.

With the Lindt bath still etched into the mind of Australians everywhere – we are hoping Häagen-Dazs steers clear of any such ice-cream action.