The Australian vies for Asian market with website launch 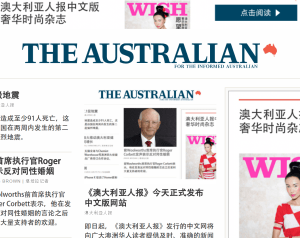 In a move that firmly acknowledges the importance of Asian and South East nations to Australian culture, News Corp’s daily broadsheet The Australian will now make its content available via a bespoke website in Mandarin.

The website will be updated on a daily basis, and will also include longer form content from supplements such as The Australian Business Review and Higher Education.

The Australian CEO Nicholas Gray says, “With over half a million of Australia’s migrants originating from China, and the prominence of China in the region’s outlook, it is important our coverage of Australia and the Asia-Pacific region is accessible in Chinese.

“As well as providing this new audience with the country’s highest quality news and commentary, we look forward to being able to offer this new environment to our advertising partners” he adds.

News Corp is not the first Australian publishing house that has attempted to connect with Australia’s growing Asian population.

Bauer Media has invested significantly in re-creating Chinese editions of Gourmet Traveller and Belle, and has spoken at length about the growth of the Chinese luxury market. Mondadori, the Italian publisher that acquired Grazia and re-launched it in March 2016, did so with a strategy that reached out to Mandarin-speaking influencers.

Harper's Bazaar, meanwhile, is well established in this area and has released a Chinese edition of the magazine for the past five years to coincide with Chinese New Year.

The Australian launch comes after publishing Chinese editions of Wish magazine last year, the content from which will also be housed on the new site.

The moves are part and parcel of a new media landscape for Australia, and one that will be discussed and analysed at AdNews Live! Reframing Australia on November 15th in Sydney.

The full program of events can be found here: AdNews Live! Reframing Australia.

Among speakers confirmed are Australia's first female MP, Mehreen Faruqi, and MLA's Andrew Howie, who alongside The Monkeys' Scott Nowell, will unveil the strategy behind the ongoing You Never Lamb Alone campaign.

More names will be announced next week.

Book your ticket now and save $100