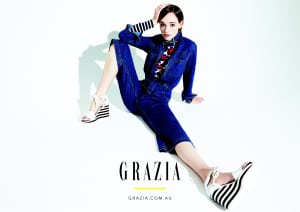 Luxury title Grazia will be returning to Australia as a digital-only product, without a print presence, after former publisher Bauer closed the magazine three years ago.

The new infrastructure is exclusively designed for digital consumption with an editorial team of 17 digital natives and no editor. Grazia will now publish independently with its parent-owner, Mondadori, an Italian magazine publisher.

The editorial team will work across four “key pillars” of fashion, beauty, lifestyle and entertainment but there will be no overarching editor, rather an editor for each category.

Influencers are also joining the editorial team as “market editors” bringing a cumulative audience of 10 million followers and offering a penetration of the millennial market.

Grazia will follow in Bauer's Harper's Bazaar's footsteps, launching its first Mandarin edition to the Australian market, tailored to incoming tourists and the Asia-Pacific population.

Harper's Bazaar has released a Chinese edition of the magazine for the past four years to coincide with Chinese New Year. This year Bauer expanded its multicultural editions, also launching an inaugural edition of Gourmet Traveller for the Chinese celebration.

Grazia general manager, Marne Schwartz, says Grazia has brought on Mandarin-speaking staff and four Chinese “market editors”, based out of Shanghai, to create original content that is “geared specifically for the target audience”.

“We have been inspired by what Edwina McCann [editor of Vogue] and Kellie Hush [editor of Harper's Bazaar] have done in the innovation space by identifying new markets. We are looking to take it to the next digital generation,” Schwartz says.

Grazia COO Nicole Keats Torrance says she is confident the title will “become the number one women's platform for style, driving consumer engagement in the market”, despite established titles such as Vogue and Harper's Bazaar having both a digital and print product.

“In terms of competition, Hush and McCann are strong figureheads in the marketplace so it will be interesting to see how Grazia moves forward,” Schwartz says.

Grazia has also secured a position as The Official Media Partner of Mercedes-Benz Fashion Week Australia, allowing the title to immediately “rejoin an international fashion conversation and deliver multilingual video and social content”.

Schwartz says Grazia approached past clients to advertise with the refreshed product, but also looked to bring on new partners to explore different creative opportunities.