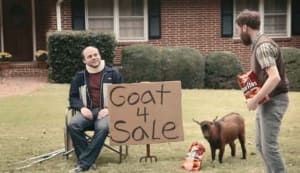 The Doritos Crash the Super Bowl competition launched 10 years ago, giving film-makers the platform to create a 30-second ad with the coveted prize of being featured during one of the world's most watched broadcasts.

The esteemed competition has received more than 32,000 entries over the last decade and has produced some of the most creative and memorable commercials. It has also been a platform to launch many creative's careers, including Aussie Dorito 2015 top 10 finalist, Armand de Saint-Salvy, who spoke to AdNews about the final iteration of the contest.

In case you missed it there's also an Aussie battling it out for the 2016 spot. See here for Australia's Peter Carstairs' Doritos Super Bowl ad.

With everything from a Dorito-loving goat to a baby bitch slapping his mother's date, the Dorito's contestants have brought the goods. This year is the last the competition will be held, promoting a reflection of the past winners:

Will the Aussies take out the trophy this year? Click here to see Australia's Peter Carstairs' Dorito's Super Bowl ad. You can vote here.