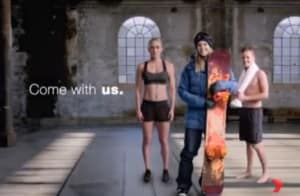 Seven has partnered with Twitter's Amplify platform to deliver exclusive video highlights from the Rio 2016 Olympic Games via Twitter.

The deal will also include client integrations with six second pre-rolls ahead of content clips. Launch advertisers signed on with Seven include McDonald's, Qantas, Harvey Norman, Samsung, Australian Defence Force, Woolworths and Toyota.

Seven claims the deal will allow it to extend the audience reach of its premium programs and event-based sports content. Seven has not only the broadcast rights to 2020, but also the marketing rights to the Australian Olympic team.  Its deal also means it has the rights on broadcast platforms that have yet to be developed for future games.

Seven already uses Twitter to distribute content and it will mean audiences can watch and re-watch Olympics highlights on mobile in their Twitter feed. Twitter claims 90% of video content on mobile is watched on mobile so the deal represents a “significant opportunity” to amplify multi-screen audiences.

“This extended partnership is an important part of our objective to bring our content to every Australian, wherever they are, and for the Rio Olympic Games, allows us to make this the first truly unmissable Olympic Games,” said Clive Dickens, Seven’s Chief Digital Officer.

Twitter launched Amplify in Australia in 2013 and made deals with media networks including Ten and Southern Cross Austereo to split the revenue from sponsored content distributed on the platform.

Ten used the Amplify platform to push content around the Sochi Winter Olympics.

Kurt Burnette, Seven’s event director, Olympic Games and Commonwealth Games, and Chief Revenue Officer, said:  “More than any before, these Olympic Games will see an explosion of content into the hearts, minds and, indeed, hands of Australians. Seven secured all platform rights to the Rio Olympic Games and beyond, and we take that responsibility seriously.  We will encourage the connection of the content and the conversation wherever it is possible.  The television screen will drive the conversation onto every other screen.

“And, importantly, this partnership with Twitter for the Olympic Games will add to that objective allowing us to connect with all Australians. This represents a significant step in our strategy of creating and delivering great content to our audiences wherever they may be and in whatever form they wish to engage with us across any device.  It underlines the power of our broadcast television business in delivering audiences and content across any platform.”

Earlier this year Seven said it was on track to smash advertising records around the Olympics, and that it is making more inventory available at lower cost for advertisers.

Twitter has just announced its first branded ads as part of the first major marketing push from new CMO Leslie Berland. The ads will roll out from 26 July across digital and a social.